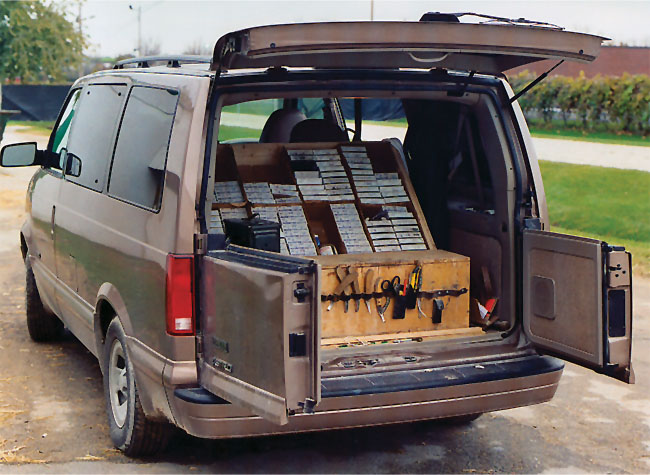 By Ron Perszewski posted on December 1, 2003 | Posted in Business Practices

AFTER 30 YEARS, Bill Scalzitti knows what works best for his racetrack shoeing efforts. And it includes a rig design that lets him shoe as conveniently and comfortably as possible.  Scalzitti works from a 2001 Chevrolet Astro van that can be found at the Arlington Park or Hawthorne/Sportsman’s Park tracks in northeastern Illinois most of the year. During the winter months, the Des Plaines, Ill., farrier and his van follow his clients on the racing circuit to The Fairgrounds racetrack in New Orleans.

The moves are relatively easy because each track provides a workshop with much of the heavy gear — forges, anvils, etc. — that a farrier might need. That means Scalzitti’s van need carry only the lighter, more compact shoeing materials.  And Scalzitti has it down to a science. “This is the handiest vehicle I’ve ever used,” he says with understandable satisfaction.

With no signs or other markings on the outside because Scalzitti is not advertising to the public, the shiny Astro looks like any other mid-sized van driven by countless soccer moms and fishermen. Except that the back is fitted with so-called Dutch doors, the key to the entire setup.

The two rear doors swing outward in normal fashion, but they extend a bit less than halfway up. From there, the “canopy” hatch opens upward. Opening the back completely reveals a clean, uncluttered workstation with easy access to the few tools and supplies Scalzitti is likely to need each day.

The most obvious feature is…

Don't Look Twice, It's All Right