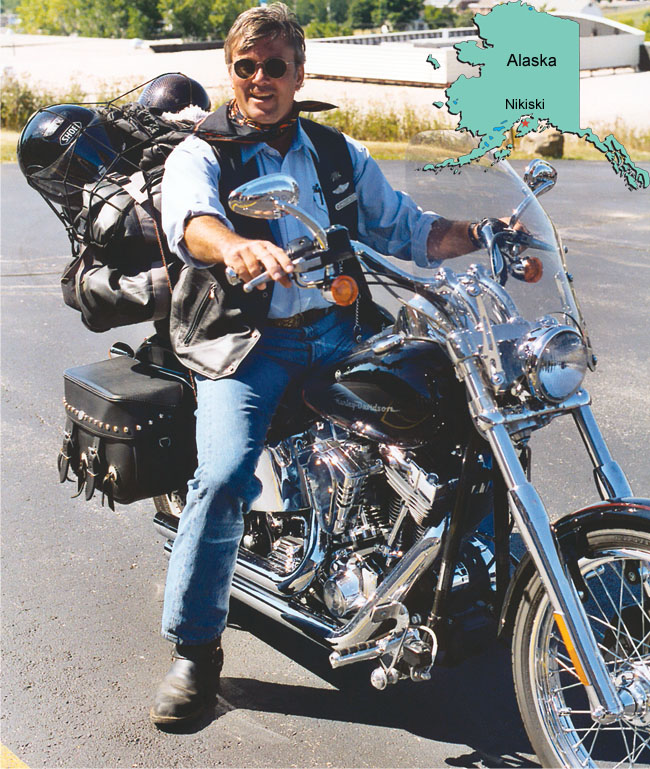 By Pat Tearney posted on May 1, 2004 | Posted in Business Practices, Education, Shoeing

LONG RIDER. Alaskan farrier Doug Nightingale astride the Harley-Davidson motorcycle he rode on a 9,900 mile round trip from Nikiski, Alaska to Milwaukee, Wis., for Harley-Davidson’s 100th anniversary festival last August. Nightingale was among the bike-riding farriers who visited an American Farriers Journal Open House during the event.

A normal day for Doug Nightingale would probably qualify as an adventure for most people.

To begin with, he’s employed as an emergency medical services battalion chief with a fire department, meaning his job involves sirens, flashing lights and high-stress situations. On days when he’s not on duty with the fire department, he’s out shoeing horses, taking care of the hoof-care needs of some 150 horses.

And he does all of this on Alaska’s Kenai Peninsula, which juts out into the Gulf of Alaska from Anchorage, with its west coast helping to form Cook Inlet.

Last summer, Nightingale decided he needed a little break from his unusual — at least by non-Alaskan standards — lifestyle. He decided to make one of his infrequent trips to the “Lower 48.” But rather than booting up his computer to check on airfares, the farrier fired up his Harley and headed south along the Pacific coast to Portland, Ore., where he joined other riders for a trip across the U.S. to Milwaukee, to take part in Harley-Davidson’s 100th anniversary celebration in late August.

During his visit, Nightingale swung by the American Farriers Journal offices and shared some of his experiences as a farrier in Alaska.

Think The Situation Through Before You Pick A Therapeutic Shoe