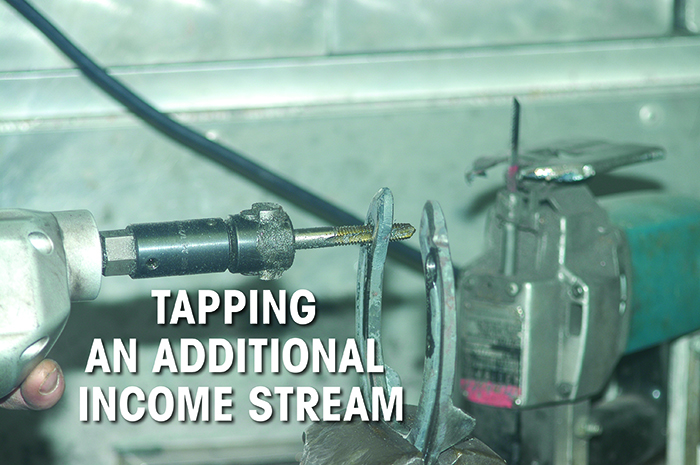 By Pat Tearney posted on September 1, 2006 | Posted in Education, Equipment

Drilling and tapping horseshoes is a skill that some farriers rarely use, but others use daily. Even if you’re a novice shoer, who isn’t often asked to add studs to shoes, it makes sense to put in the practice time to master the skill.

It’s virtually a requirement for anyone who wants to shoe hunters, jumpers and other high-end equine athletes. Not only are pay rates higher for shoeing this type of horse, but experienced farriers will add an additional charge for drilling and tapping shoes. If you’re efficient at it, that additional charge will give you a nice return on the time and effort you expend.

The most common reason for drilling and tapping shoes is to prepare the shoes for studs, but the skill is also useful if you’re putting together hospital plates or and in some other types of therapeutic shoeing.

Drilling and tapping isn’t particularly difficult and can be accomplished by hand or power tools. The least expensive method doesn’t actually involve drilling holes at all, but making them with a punch and hammer, then tapping the holes using a tapping wrench or hand-tapper.

Holes can also be drilled using hand-held drills or drill presses, with the latter being the choice of most farriers who drill and tap a lot of shoes. Holes can also be tapped using power tools, including drills, drill presses or specialized power tapping tools. Initially, you may want to decide which method to use based on how much you can afford…

The Basics of Drilling and Tapping

[Video] How To Drill And Tap Horseshoes For Calks