By Pat Tearney posted on September 1, 2006 | Posted in Lamenesses

If George Platt had his way, no foundered horse would ever be given bute.

Bute — phenylbutazone is an anti-inflammatory drug that is also used for pain relief and to reduce fever. It’s commonly used in laminitis cases because of all of these properties. But Platt, of Eagle, Colo., and a member of the International Equine Veterinarians Hall Of Fame, believes that killing the pain can potentially lead to killing the horse.

He says the problem with giving a horse bute is that it kills the pain and results in the horse continuing to stand — which Platt says leads to the rotation of P3, which in turn crushes the circumflex artery. That cuts off the blood supply to P3, resulting in the demineralization of the tip of the coffin bone.

“You can also have a blood clot form in the circumflex artery,” he says. “The blood flow backs up from the clot and you can lose the whole bone. All the bad things that happen are related to the blood supply.

Platt says this is similar to people suffering from diabetes who lose the blood supply to their feet. 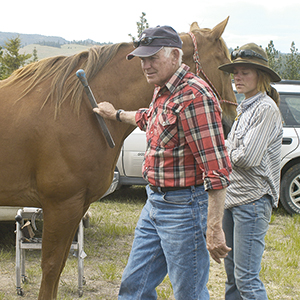 Platt says he stopped giving laminitic horses bute in 1970. He believes that the proper way to treat…