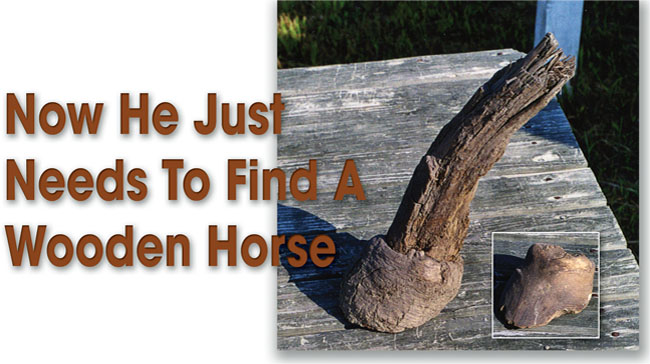 Now He Just Nees To Find A Wooden Horse

By Pat Tearney posted on January 1, 2006 | Posted in Education

LIMBS FROM A LIMB. While walking in the Pennsylvania woods, farrier Martin Kenny noticed these pieces of wood that bear a distance resemblance to hoof models. He’s kept them ever since and says most farriers have a hard time believing they are completely natural.

This particular tree limb would have only caught the eye of  a farrier.

Martin Kenny wasn’t shoeing horses when he came across the “hoof models” pictured on this page. And believe it or not, he never touched either one with a knife or any other carving tool.

But this particular leg would have to have been off the perfect horse for Long John Silver, the famed one-legged pirate of Robert Louis Stevenson’s Treasure Island.

Needless to say, Kenny picked up the tree limb that looked like a horse’s limb and took it home with him. He’s kept it to this day and it is now displayed in his shoeing shop in Carthage, N.C. And it wasn’t the only encounter Kenny had with a hoof model carved by Mother Nature. A while later, he found a piece of wood that bears a pretty remarkable resemblance to a hoof wall. It’s also pictured here.

Kenny says when he shows either of them, people have a hard time believing…

From A-to-Z, you can Find it Here!

From A-To-Z, You Can Find It Here!