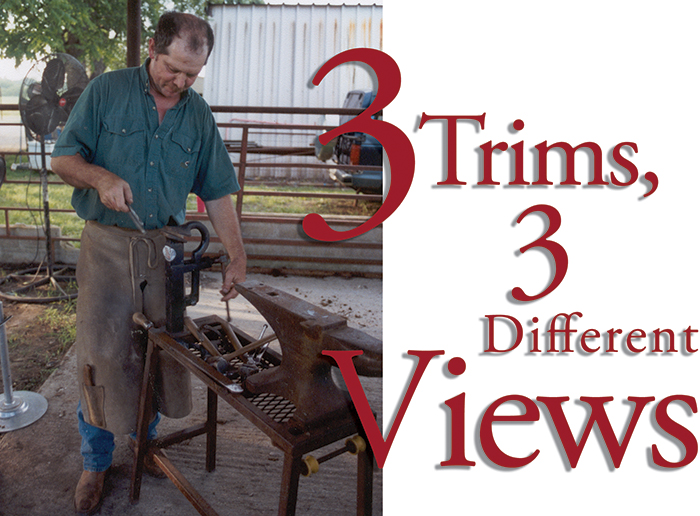 By Neal McCristy posted on January 1, 2007 | Posted in Shoeing, Trimming

Farriers have different ways of getting the angles they want

These profiles and photographs demonstrate the hoof trimming and shoeing practices of different farriers in the Missouri and Kansas area. The group includes Charlie Comstock, of Deerfield, Mo., William “Toby” Tobler, of Drexel, Mo. and the father-son team of Ken White of Scammon, Kan., and his son, Glenn, of Pittsburg, Kan.

While the results of all three trims may appear similar, each of the farriers had a different approach in evaluating a horse as well as in trimming.

Looking For Something Close To 55

How he became a farrier: He attended Kansas Farrier School in Girard, Kan., in 1972. Now he’s a full-time farrier who teaches farriery at Fort Scott Community College in Fort Scott, Kan. “I feel my job here is to keep them from making big mistakes,” Comstock says, “because I’m not going to fuss at them for making a little mistake.”

Special considerations for gaited horses: The angle is lower and the heel is extended on the shoe. Gaited horses don’t tend to overreach. Says Comstock, “By lowering the angle, you’re…

Inside the Perimeter: Setting The Shoe Back