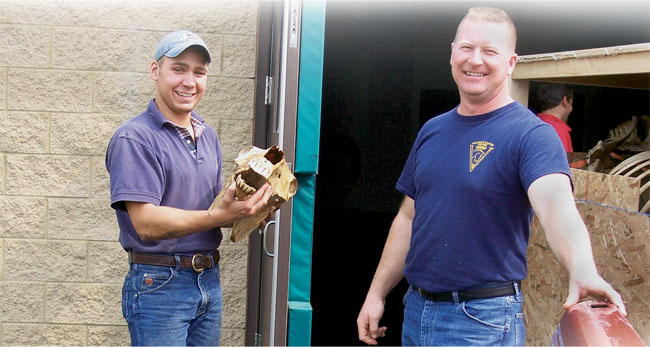 Nothing But 100% Hoof-Care Education

By Frank Lessiter posted on May 1, 2007 | Posted in Education

SUMMIT PRIZE DELIVERED. Walter Varcoe (at right) congratulates Chuck Jones (left) during the early April delivery of a full-sized equine skeleton. Jones, a farrier at Rood & Riddle Equine Hospital in Lexington, Ky., had his name drawn from among attendees at last winter’s fourth annual International Hoof-Care Summit. Varcoe, a Port Jervis, N.Y., farrier, will donate another $15,000 equine skeleton to be awarded in an attendee drawing at next winter’s fifth annual International Hoof-Care Summit.

It’s hard to believe that extensive planning is already underway for next winter’s fifth annual International Hoof-Care Summit in Cincinnati, Ohio. It simply doesn’t seem like 5 years ago that the American Farriers Journal staff was figuring out what it was going to take to make the first Summit a big success.

Make sure that you mark your calendars for next winter’s Summit that will be held in Cincinnati, Ohio, from Jan. 29 to Feb. 1, 2008. It will be built around an exciting theme of “Spotlight On Hoof Care” and will include some exciting surprises to celebrate the fifth annual Summit.

Attendees have provided many good ideas to further refine the Summit educational sessions and Trade Show. However, they’ve also told us that the current format of 8 general sessions, 12 Hoof-Care Classrooms and 24 Hoof-Care Roundtables format is right on the mark for this already highly successful hoof-care educational event.

While filling out 710 Summit surveys, attendees suggested 76 new topics and 49 speakers for the 2008 program. Based on…

Cincinnati: A Beacon Of Hoof-Care Education

Continued Education is the Name of the Footcare Game