A Fond Farewell to Two of the Industry's Best

During the final month of 2008, the farrier industry lost two of its best-known members with the passing of Eddie Watson and Reggie Kester, who both succumbed to cancer.

Following are tributes to Watson and to Kester, written by equine veterinarians and farriers who knew them well. Our thanks to Stephen O’Grady, DVM, for gathering the Eddie Watson Tributes and to Bob Smith, owner and operator of the Pacific Coast Horseshoeing School, in Plymouth, Calif., for bringing together the tributes to Kester.

An Inspiration And Driving Force

The members and families of the American Farrier’s Education Council (AFEC) would like to offer our heartfelt condolences to the family and friends of Reggie Kester for their loss.

Reggie was the founder and owner of the Oklahoma State Horseshoeing School in Ardmore, Okla. Reggie, with his wife Marcella, started with a dream in 1975 and with hard work, dedication and sacrifice created one of the leading farrier schools in America.

Reggie was intensely proud of his school and the thousands of men and women he trained over the years. When his students and horseshoeing school were attacked, Reggie defended them as he would his own children.

Reggie was the driving force behind the formation of the AFEC. His belief in the importance of horseshoeing schools required that he act when schools were criticized. Reggie and Marcella made contact with every school and welcomed the owners of those schools to Oklahoma City to form the AFEC. 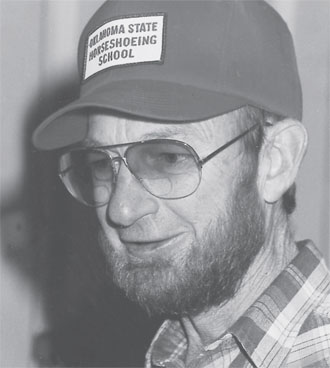 From that first meeting, Reggie and Marcella treated all as family. His kindness, integrity and leadership as the first AFEC President will be missed.

If the number of lives he touched judges the greatness of a man, then Reggie Kester is indeed a great man.

When I think of Reggie Kester, I think of laughter. He was serious and competitive in his day-to-day life, but always seemed to look to the lighter side of things. Quick with a smile, he was friendly to everyone, especially little kids. He was dedicated to the farrier profession and had the ability to disagree without alienating those he disagreed with.

We had a lot of fun through the years and I’m proud to have called him a friend. He will be missed.

Reggie was a valued friend, respected colleague and someone who loved what he was doing. Reggie started his school 11 years after I taught my first class in 1964 in Bozeman, Mont. I’m very glad our family had the opportunity to visit him several years ago and could tell him personally how much we appreciated him.

Of course, we believe his success in life was due to the woman behind the man. Marcella is an outstanding person who has given Reggie terrific support. When we visited their home, we immediately realized it was designed with Marcella and their whole family in mind, for it is warm and inviting. We always think the best of a man who is proud of his grandchildren and enjoys being with them! And Reggie was that kind of man.

We were also impressed that even the way they have their farrier supply store set up is very unique in how it welcomes customers inside to “sit a spell” and enjoy visiting, as well as buying.

Reggie has been a stalwart contributor to farrier education and has always wanted what is best for a student’s learning opportunities. It’s been good to see how he has involved his family in running their school and business. We wish Marcella and Regan the best as they add to Reggie’s legacy.

On Jan. 3, 2009, I went to the funeral of Reggie Kester, horseshoer, teacher and one of the best family men I have ever known. My wife and I have been proud to call Reggie and Marcella friends these many years.

Even though we were competitors, he never treated me as one. He treated me as a friend. With our wives we went to meetings. out to dinner together and visited back and forth occasionally.

The number of horseshoers who showed up to say good-bye to Reggie is a testament to the respect and admiration in which he was held in our profession. There must have been over a hundred horseshoers there to say goodbye.

The line of cars and pickups going from the church out to the cemetery was miles long. What a sight it was.

He continues to live on in our hearts and wherever horseshoers gather.

I met Reggie and Marcella in November 1975. I enrolled in the third class at the newly established Oklahoma State Horseshoeing School.

We received great instruction in shoeing and forge work, but Reggie went beyond that by sharing things he had learned from his own experience to better prepare us as for our careers.

The memories of that time and the friendship that was formed with Reggie and Marcella didn’t end with the class. It spanned over a third of a century and is one of the most important friendships of my life. Reggie was always available over the years to give me advice if I ran into a shoeing problem or needed advice on life. He was a true friend.

Reggie will be greatly missed, but his influence will live on through his son, Regan, and others who are following in the footsteps of our profession.

A Man Who Affected Many Lives

Reggie Kester was a long-time member, supporter and friend to the Oklahoma Farrier’s Association and to many of us personally.

One of the best things I ever did for myself was to attend Oklahoma State Horseshoeing School. The best thing Reggie and Marcella did for me was be my friends.

At the funeral I knew I wasn’t alone — it was standing room only. I was honored to be a pallbearer. On the way to the cemetery, we shared stories of how Reggie affected our lives.

I’ll remember Reggie’s chuckle, his riding his big rocking horse, his down-to-earth advice, his enthusiasm and his honesty.

We will miss seeing your face, Reggie, but you will always be with us.