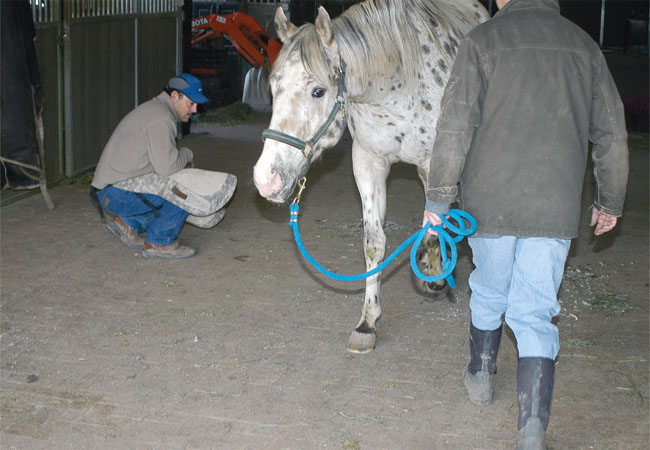 Attention to detail is the trademark of New Mexico shoer

Andrew Varela is starting a little later than he normally does and his day of “Shoeing For A Living” will be a light one, limited to working on horses at just one stop.

But don’t get the idea that it’s going to be a day of rest. Varela, an active member of the New Mexico Professional Horseshoers Association, has been doing double duty for the last few days. He’s not only been keeping up with his shoeing book, he’s helping his association host the annual convention of the American Farrier’s Association (AFA) in Albuquerque, just a short distance south of Rio Rancho, where he lives.

Varela, who has been shoeing horses for more than 20 years, has been an active participant in shoeing competitions, so he’s been part of the crew making sure work stations are set up and equipped the way each competitor prefers. He was at the Albuquerque Convention Center late last night and will be headed back after he’s done with his shoeing later this afternoon.

But this morning, he’s headed out to a local ranch for a regular footcare appointment. It’s a cold, crisp morning in the high desert country. A brisk wind blows sand and dust into the air, creating a light haze. Varela says it’s been unseasonably cold for late February and wet as well. As he carefully steers his shoeing rig down the roads leading to his first stop, he talks about how he got started as a farrier.

For The Good Of The Horsey