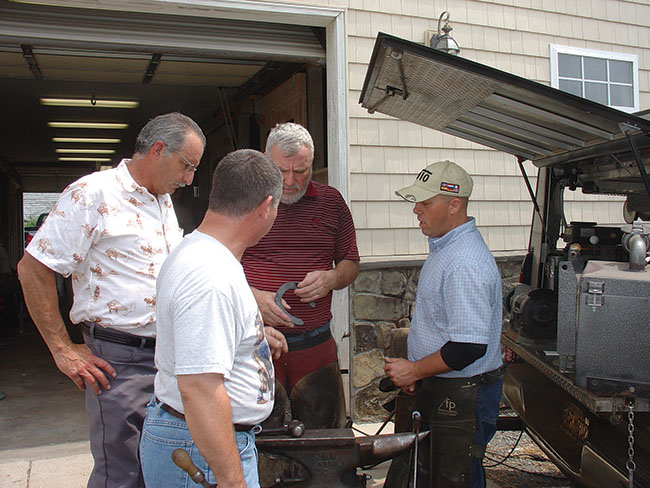 Farriers gathered round the anvil at a Guild of Professional Farriers held at Deepwood Veterinary Cinic in Centreville, Va. The two-day event included the organization’s first examiner training since its recent reorganization.

Beane there. Done that. Two years in a row.

Beane, from Northallerton, North Yorkshire, is the first back-to-back WCBC champion since Billy Crothers of Wales won the second and third of his five Stampede crowns back in 1995 and 1996.

“It’s unbelievably hard to do that. Really, really hard,” said Beane, 31. “You’ve got so many good guys competing here … you’ve got to be on the top of your game, and I’m lucky.”

Beane fired up a performance during the 31st annual WCBC that couldn’t be matched by any of his competitors. During the 10-man semifinal, he opened up a 21-point lead on Jake Engler of Magnolia, Texas. In the final, he increased his lead over Engler to 32 points.

Beane finished with 147 points to Engler’s 115. Scotland’s Derek Gardner was third with 115 (Engler won a tiebreaker on the fit of a horse’s shoe), fellow Scot David Varini was fourth with 94, and Texan Gene Lieser ended up fifth with 87.

Beane won $10,000, as well as a gold-and-silver Stampede championship buckle, a limited edition bronze trophy and a champion’s jacket.

“It was pretty rough going for me  Nothing…