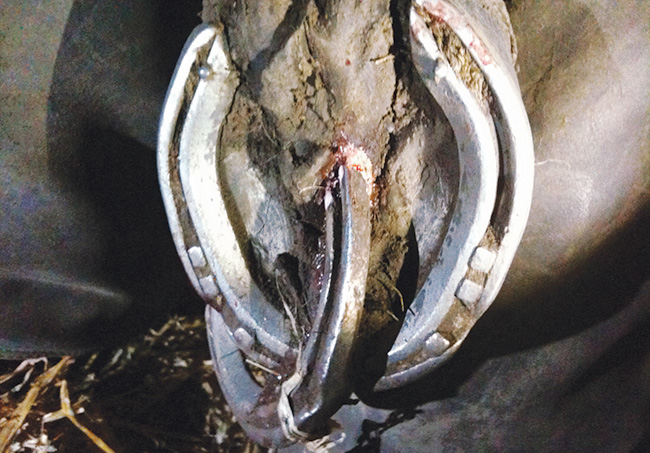 By Mark Aikens posted on September 1, 2011 | Posted in Lamenesses

I received an emergency call from a client late one winter afternoon while finishing up some other horses. She indicated her horse had lost its right-front shoe, and she thought the right hind shoe had somehow dislodged and punctured the sole.

The horse had been brought in from a paddock after dark, as the sun sets at approximately 4 p.m. in the United Kingdom in January. The client was instantly aware that the horse was severely lame on its right hind foot.

Owned by Emma Goldsmith, Dynamite is a 12-year-old Thoroughbred gelding that is used for riding-club activities and low-level dressage. When I took the phone call, I told the client I’d get there as soon as I could. I arrived 25 minutes later, and the horse was tied in his stall and happily munching from a hay net. But he was not bearing any weight on the affected right hind limb.

Picking up the right hind foot, I was shocked.

His hind shoe was still where I had nailed it in place 2 weeks earlier. However, the “lost” right front shoe was stuck through this foot.

The lateral heel of the front shoe was penetrating at an oblique angle into the frog, midway between the apex and the central sulci (Figure 1). After evaluating the foot from the solar view, I brought the foot forward and gently rested it on my knees to observe a secondary injury site (Figure 2).

The medial heel of… Mark Aikens, DipWCF, BSc (Hons), owns and operates Trinity Farrier Services in Norwich, England, and has been a professional farrier for more than 30 years.

How Is Your Hoof Care Affecting The Inside Of The Equine Foot?

Effective Strategies for Fighting Infections of the Hoof Capsule