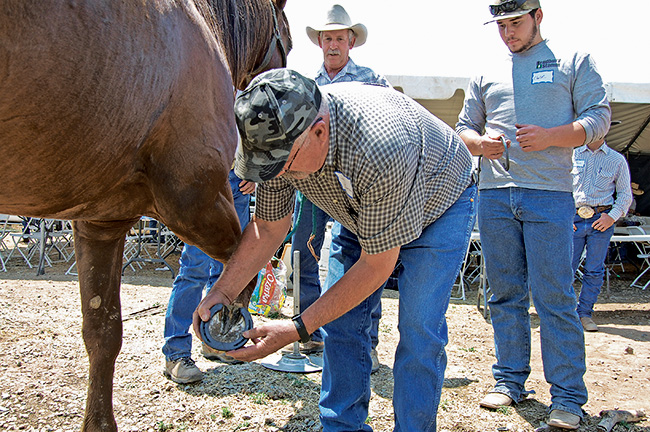 By John Bradshaw posted on January 9, 2011 | Posted in Shoeing, Trimming

Farriers all have slightly different shoe-shaping styles and a few have some very different techniques. Just about any farrier has pulled a shoe that was nailed on by someone else and puzzled over what that other horseshoer could have been thinking when he chose that shape. Then the new farrier nails on a shoe that is substantially different.

There are countless arguments about the best shapes, as well as a wide variety of styles; round toes, broad toes, square toes, symmetrical shoes or those that strictly follow the white line. The list of shoe shapes goes on and on.

I decided to conduct a little unscientific experiment to see what kinds of shapes would be produced if several farriers all shaped a shoe for the same foot. I expected there would be many different shapes and styles, but that turned out to not be the case.

The first clinic at Santa Fe, New Mexico’s San Marcos Feed, the company that bought out Wagon Mound Ranch Supply’s horseshoe line, was chosen for the location. Owner Tom Macdonnel had a horse brought in especially for the experiment, and Delta Mustad Hoofcare Center furnished the shoes.

Mark Milster of Washington, Okla., was the clinician for the day. He trimmed the right front hoof and dressed off the flares, which were minor to begin with. The foot was very nearly symmetrical, so that took away any discussion of dealing with symmetrical abnormalities in the shaping. 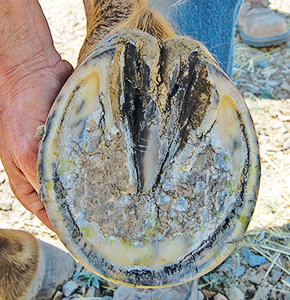 The farriers all shaped shoes for this hoof, which…

Farrier Tips: Be Efficient in Hot and Cold Shaping of Horseshoes