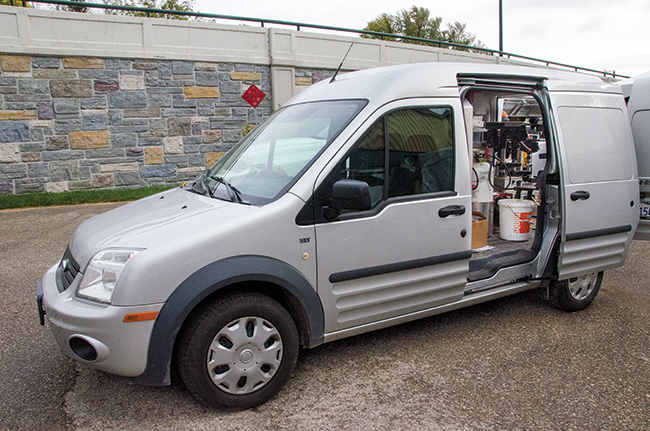 By Jeremy McGovern posted on December 1, 2014 | Posted in Equipment

Light-duty vans offer fuel efficiency, but also can provide a surprising amount of storage with the proper planning

Long the preferred style for mobile tradespeople in Europe, the light commercial van is catching on in the United States. Manufacturers of the two most popular lines, the Ford Transit and Mercedes Benz Sprinter, have reported increased sales in recent years with these vehicles in the U.S.

While this vehicle style won’t replace the truck body or trailers, more farriers are switching to them for their practices. Marengo, Ill., farrier Vern Powell is one of these recent converts — sort of. His primary shoeing rig remains his 3/4-ton Dodge pick-up with a shell, but 6 months ago he purchased a Ford Transit Connect for use in his multifarrier practice by his apprentice Heather Beauchemin. Powell likes the vehicle and uses it at more of his shoeing stops than what he first expected.

Powell was drawn to the vehicle style after seeing British farriers operate small vans when he visited England. 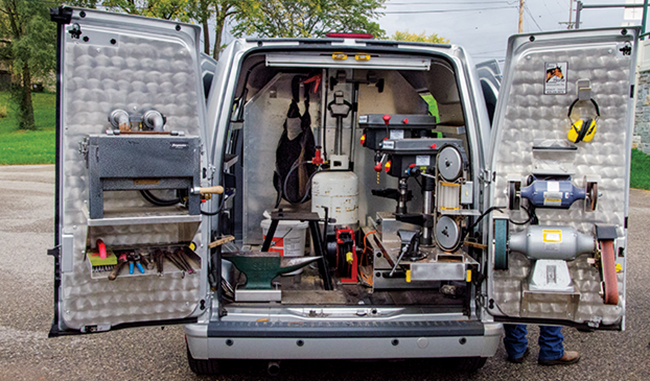 “It looked like a really good, functional rig with how the British farriers were using them,” he says. Back in the States, Powell then was interested in how farriers like Jack Craddock of Star, N.C., and Mike Poe of Columbia, Md., had outfitted their vans.

As fuel prices began to surpass $4 per gallon in early 2014, he had all of the justification he needed to add the vehicle to his practice.

Powell took the van to Bay Horse Innovations to outfit the vehicle’s interior. Before working on the layout with Bay Horse, he took into account…