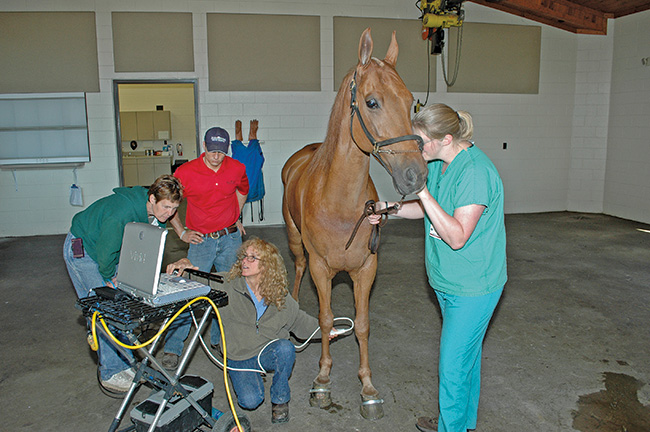 Bowed Tendons: The Farrier's Role in Prevention and Treatment

Modern ultrasounds are useful for diagnosing bowed tendons and other soft tissue injuries, particularly minor tears that aren’t obvious during palpation. It may take an experienced person to spot less obvious tears in the tendons.

Bowed and other tendon injuries are frequent with athletic horses. The farrier plays an important role in preventing as well as treating these injuries. This is best accomplished by keeping the horse trimmed and shod so as to avoid excessive strain on any one part of the leg, or to help take pressure off an injury.

Greg Andrews, DVM, with Moore & Co., a Calgary, Alberta equine practice, says there are some misconceptions about bowed tendons.

“My definition of a bowed tendon is an injury in which there is tearing of the tendon fibers, either in the superficial flexor tendon or the deep digital flexor tendon, on the front or hind leg (though most occur in the front leg), as opposed to a condition where tissues around the tendon are merely swollen,” he says.

“The latter is sometimes called a bandage bow, but it won’t cause tearing of the tendon. Many bowed tendons get blamed on bad bandaging but if they are true bowed tendons, with tearing, it happened previously. The bandage was applied and then blamed for it.”

Andrews adds that overly restrictive bandaging can lead to an inflamed and enlarged tendon, but says these are easily treated compared to a tendon that has actually torn.

There are various degrees of…

Premium content is for our Digital-only and Premium subscribers. A Print-only subscription doesn't qualify. Please purchase/upgrade a subscription with the Digital product to get access to all American Farriers Journal content and archives online.
KEYWORDS bowed tendon prevention and treatment regular footcare appointments Soft Tissue Injuries trimmed and shod Ultrasound

The Farrier’s Role In Rehabilitation After Traumatic Injuries