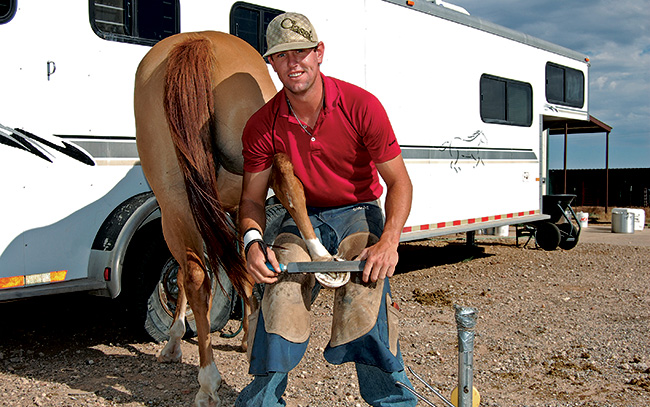 By John Bradshaw posted on December 1, 2012 | Posted in Business Practices

Zach Dicken made the decision 3 years ago to become a part-time horseshoer, and the farrier-fireman combination really works for him. He works a 24-hour shift every third day at the Lubbock Fire Department, which provides a steady paycheck and those elusive benefits that so many farriers struggle to pay for.

It’s been said that shoeing is the best part-time job in the world and the worst full-time job. While that can’t be entirely true, there may be some wisdom behind the statement.

Zach Dicken might not completely agree with that observation — he would never say shoeing is the worst full-time job — but he certainly sees the logic. He shoes as much as many full-time farriers, but he works every third day as a fireman for the Lubbock Fire Department, in Lubbock, Texas.

“This is the best of both worlds,” he says. “I have a real job, but it’s not really a real job where I have to be there every day. And I get to shoe horses — working for myself, being outside, doing what I want to do.”

Benefits A Big Plus

The fire department pays a good salary, but better yet, it provides what self-employment lacks: benefits. “It’s a pretty good gig, with insurance, retirement, all those benefits, and I still have days off to shoe horses,” says Dicken.

Dicken is following in his father’s footsteps with this plan. Dwayne Dicken is a horseshoer in North Texas, as well as a fireman for the Plano…

Premium content is for our Digital-only and Premium subscribers. A Print-only subscription doesn't qualify. Please purchase/upgrade a subscription with the Digital product to get access to all American Farriers Journal content and archives online.
KEYWORDS benefits of dual career horseshoer-fireman organization self-employment Zach Dicken

Delivering As An All-Around Farrier