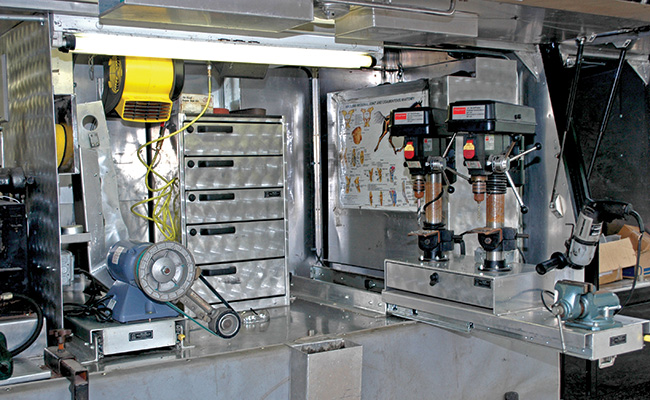 Organization, lighter units and, yes, coffee makers can save you time and money

It’s been said that efficiency is intelligent laziness. While shoeing eight horses a day hardly is considered a leisurely workday, there’s something to be said about an economy of movement at the shoeing rig.

An efficient rig can mean fewer steps, less searching and improved performance, which means a farrier not only will be saving time but money.

Efficiency in various forms is continuously evolving in today’s shoeing rigs. Yet, there are four areas where farriers can capitalize to improve their practice — fuel efficiency, tool placement, power source and practical creature comforts.

As fuel prices continue to climb (the average price for regular gasoline per gallon is $3.68, while diesel is $3.97, according to the U.S. Energy Information Administration), American families increasingly are turning to more cost effective means of transportation, as well as trying to make the proverbial ends meet. Farriers are no exception. According to the most recent American Farriers Journal Farrier Business Practices survey, farriers drive an average of 405 miles a week. That leads to quite a hefty fuel bill.

“There’s no question that rigs have gotten smaller,” says John Halko of Georgia Farrier Supply in Jasper, Ga. “The units that are still in service were designed around fuel prices during the 1970s and ’80s. When fuel was less than $1, you could have a big rig, but not when it’s $4.”

Many farriers favor the large diesel dually trucks, such as the Ford King Ranch. But as fuel prices have skyrocketed…

What Are Farriers Looking for In Shoeing Rigs?

Good Ideas To Improve Your Rig

So You're Thinking About Switching Rigs