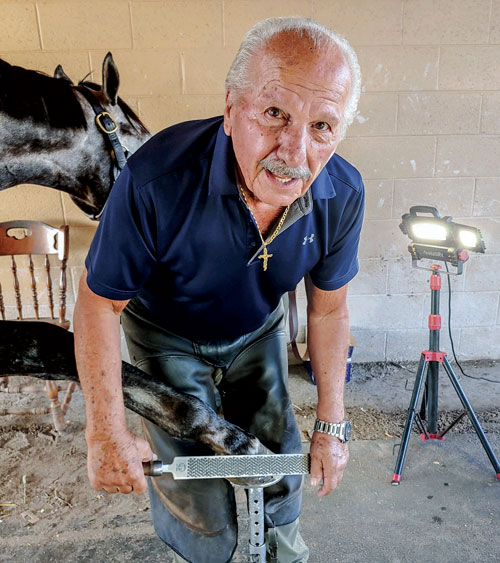 Two-time Derby winner served as an inspiration for equine professionals

Amato started his farrier career working for his father as an apprentice for 3 years. Amato first began his craft on racehorses at the 1949 New York Aqueduct. His impressive résumé started to develop after he worked fitting shoes for Hall of Fame trainer Hirsch Jacobs.

Amato handled many champion horses and was known for being as friendly as he was professional. Amato’s work as a farrier has contributed to track records throughout the East Coast, such as the first filly to win the Belmont in more than 100 years.

Amato also would go on to shoe two Derby winners before his death – Super Saver in 2010 and Always Dreaming in 2017.

Amato eventually passed the trade on to his own son, Ray Amato Jr. The father-son duo worked together extensively, including shoeing Super Saver and Always Dreaming and three Belmont Stakes winners — Rags to Riches in 2007, Palace Malice in 2013 and Tapwrit in 2017. In 2020, Amato Sr. was inducted into the International Horseshoeing Hall of Fame.

Amato Sr. was preceded in death by his son Ray Amato Jr., who died in 2021 at 62, from pancreatic cancer.

Smithing to Fit the Horse

Ray had an incredible eye for hoof balance. When he was finished shoeing a horse, you would see a foot that was setup as good as it possibly could be, in relation…