Wisconsin farrier Roy Bloom is highly regarded for his attention to detail. He is widely known for his expertise under a horse, working in the forge at competitions, in a classroom as a clinician and in the workshop as a tool maker. In 2001, he was inducted into the International Horseshoeing Hall of Fame in recognition of his commitment to perfecting his blacksmithing. In 1984 he joined the American Farrier’s Association (AFA).

The legendary craftsman didn’t have a traditional start. He wasn’t involved with horses as a kid and he didn’t ride. It was when he was looking for summer work as a high school student that he began working with the animals that would support a lifelong profession. He became highly sought after as a farrier in northwest Indiana where he ran a multi-farrier practice with mentor Tom Willoughby before relocating to Wisconsin to focus on building tools.

Today, he can be found in the workshop welding and forging farrier tools. He says he’s welded 88,000 steel handled tools over the course of 30 years. In a recent interview, he took a walk down memory lane and reflected on his career and what he has learned.

Q. How did you get started as a farrier?

BLOOM: A local boarding stable hired me to clean stalls and make hay. I watched a fella come by every so often. It was my job to bring the horses to him and hold them while he worked on their feet. I watched the boss hand him a pile of money and it looked better than what I was doing. In 1971, I started apprenticing with Rick Kries and he encouraged me to attend the North Texas Horseshoeing Institute, which was run by Al Pinson.

Somewhere in the 1980s I became involved in blacksmithing contests and it took things to another level. In 1989 I was the alternate on the American Farriers Team and was part of the 1990 Gold team and Silver team in 2001.

I couldn’t buy the tools I wanted so I started building them for myself in the early 1980s. I donate some of these to auctions and people began asking where they could buy them. It was getting to the point where I wanted to concentrate on the tool end of the business, but my clients in Indiana wouldn’t let me stop shoeing. So many people had given me the opportunity to shoe their horses when I was right out of school. Years later I was still shoeing for them, their then-adult kids and grandkids. I couldn’t tell a couple generations of families and friends I was going to quit shoeing horses to make tools. I left the business to my partner and moved up to Drummond, Wis., to establish the shop. I still shoe some, but it would take quite a lot of traveling across Michigan’s Upper Peninsula, Wisconsin and Minnesota to find the same number of horses that were in Indiana.

Q. What was the first tool you made?

BLOOM: A wood-handled creaser. It seemed to be the tool that was really needed at the time. It took a while to figure out how to weld the handle so that the tool was safe. There was a lot of trial and error that went into the design in the beginning. I talked with some engineers and we got it ironed out and it has worked well ever since.

After setting up my shop in Wisconsin I found out there was a big  demand for custom ironworks like railings and gates. At its peak, there were four of us working here to keep up with the demand for tools and custom orders. A few years ago, there was a housing crunch and all that custom work disappeared and never really recovered. Today, it’s just me.

I have two different buildings with workshops inside for specific parts of the process. One has a forging area and space for grinding machinery. The other building is for fabricating, there are layout tables and saws in there.

Q. How long does it take to make a tool?

BLOOM: The entire process takes several days to complete one tool. It’s all production work so I’m not working on one tool from start to finish, I’m working on one piece for multiple tools at the same time. When I’m making steel-handled tools I start with the head. I put 30 into a four-burner fire at the same time. The head is forged on a power hammer and all 30 bars are allowed to cool down. I try to do the forge work in the afternoon so the bars can cool down overnight. The next morning, all the pieces are ground to shape and then cut off to length. The striking end is prepared on a grinder.

Next, I cut the handles and begin the welding process. I tack the heads on and they go back into a fire that’s heated to 300 to 400 degrees. After the welding is done it goes back into the fire that’s up to 1,600 degrees and then they get buried in ashes so they cool as slow as possible. Day to day I’m always building pieces of the tools to get ahead.

Nothing is wasted in the shop. Each head uses about 2 to 2 ½ inches of material. When I get down to what’s left on the straight pieces, I use what’s left for things like punches so that everything is used. 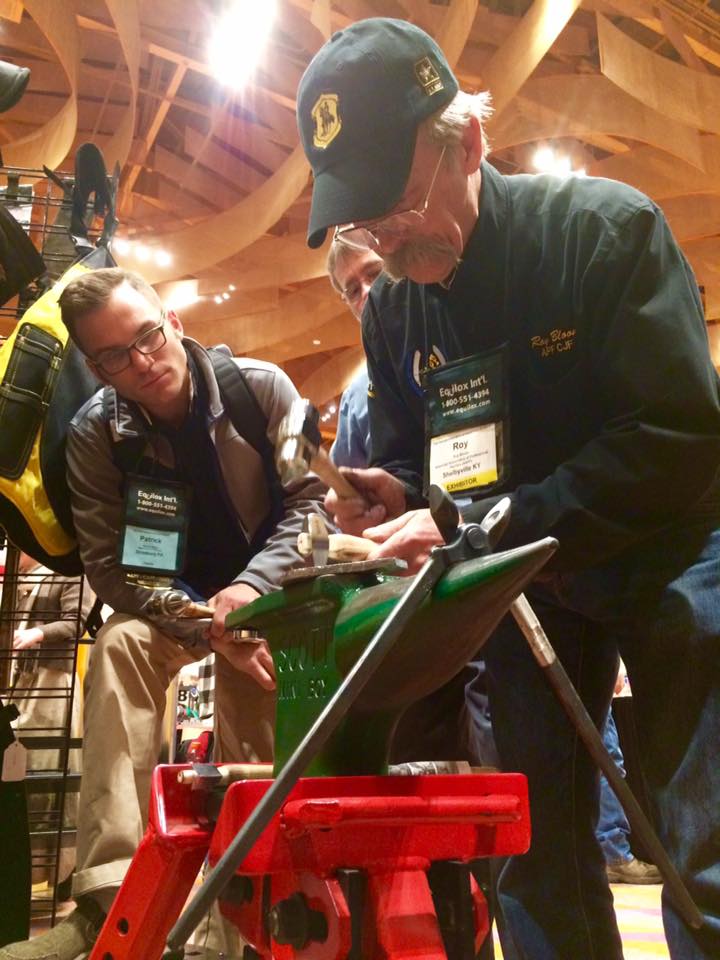 Q. How did you become involved with the Summit?

BLOOM: I first got involved with the Summit because I’m a tool manufacturer. The first thing I’m going for is the Trade Show because I’m promoting my product. But once you get there you can’t help but look at the list of speakers and someone catches your eye. Then you see another session and another that you just have to see.

It has been exciting to see how the Trade Show has grown. It’s also the one chance you get to see everybody all year. This is a small industry. If what they say is true — that there are about 30,000 farriers in this country — I probably have gotten to know 5,000 to 6,000 through the Summit and by teaching clinics.

Q: The industry has changed a lot in the almost 50 years you’ve been a farrier. What is one of the changes that stands out the most to you?

BLOOM: When I started shoeing horses in the 1970s, propane forges hadn’t been invented yet. Farriers had coal forges set up in the back of their trucks and all the work was cold shoeing.

There were only three companies making shoes at the time and farriers didn’t put clips on anything. Today hot-fitting and clips are common and the selection of tools and pre-made shoes is limitless.

Q. What advice do you have for new farriers coming up through the ranks?

BLOOM: Never stop learning. When you come out of shoeing school you think you know it all, but you really know nothing. If you’re going to stick with this profession all your life, you need to keep learning. Push yourself to get certified, there are several different levels. Then push yourself by stepping up and competing in competitions. Get involved in all aspects of the industry. There are three or four different organizations. Join them all. Every single one has something to offer and you need to take advantage of all of it.

[Podcast] A Conversation with Roy Bloom