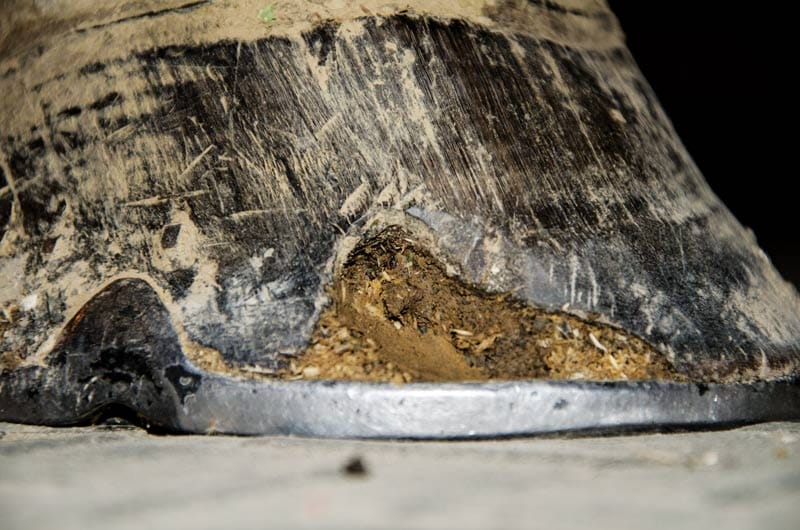 How to Prevent and Treat White Line Disease in Horses

As the damp fall weather approaches, farriers will be keeping a watchful eye on hoof walls for signs of onychomycosis, more commonly known as white line disease.

Although it can occur at any time of year, opportunistic fungi that compromise the horse’s hoof wall thrive in damp climates, according to Michael Wildenstein’s 2013 Fellowship dissertation for the Worshipful Company of Farriers. “A Detailed Examination of White Line Disease” found four fungal cultures — Trichoderma sp, Mucor sp, Aspergillus glaucus and Gilocladium sp — in five infected feet. No bacterial cultures were found.

“It’s been scientifically proven that onychomycosis is an opportunistic fungal infection; however, due to the nature of what a horse stands on and in every day, secondary bacterial infections are common,” says Nicholas Denson, a Sagamore Beach, Mass., farrier who counts the International Horseshoeing Hall of Fame member from Sharon, Vt., as a mentor.

It’s always best to prevent an infection rather than fight one. Simply put, the alternative often results in a fight that’s difficult to contain. While hoof-care clients can spearhead prevention by providing a clean and dry living environment for their horses, farriers are likely the first line…

What You Can Do to Prevent White Line Disease

How to Prevent and Treat Thrush in Horse Hooves