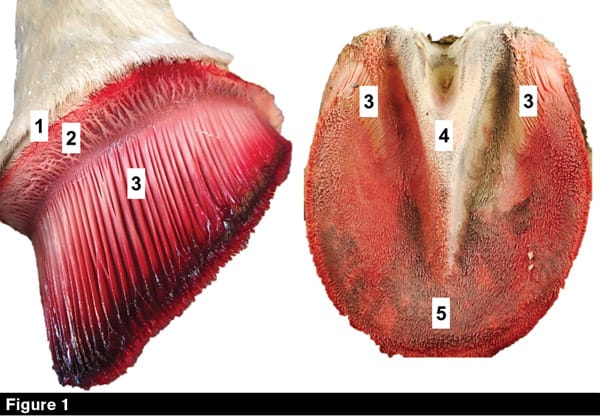 Horse’s Hoof is Crucial for Locomotion and Performance

By Jenny Hagen posted on September 9, 2021 | Posted in Anatomy

Although the capacity for adaptation is extensive, it’s also susceptible to tissue alteration and injury

The hoof is the structurally and biomechanically complex designed and highly specialized digital end organ of the equids (König et al., 2015).

It is defined as the modified strongly cornified skin covering the end of the distal extremity of the limb and all interior structures enclosed and protected by this capsule: bones, joints, ligaments, tendons, bursae, vessels and nerves (Budras et al., 1991; Salomon et al., 2015).

Premium content is for our Digital-only and Premium subscribers. A Print-only subscription doesn't qualify. Please purchase/upgrade a subscription with the Digital product to get access to all American Farriers Journal content and archives online.
KEYWORDS anatomy of the horse hoof Dr. Jenny Hagen horse hoof capable of extensive adaptation horse hoof susceptible to injury purpose of the horse hoof Teamwork Is Crucial At The World Equestrian Games