A Quick and Easy Way to Provide Frog Support 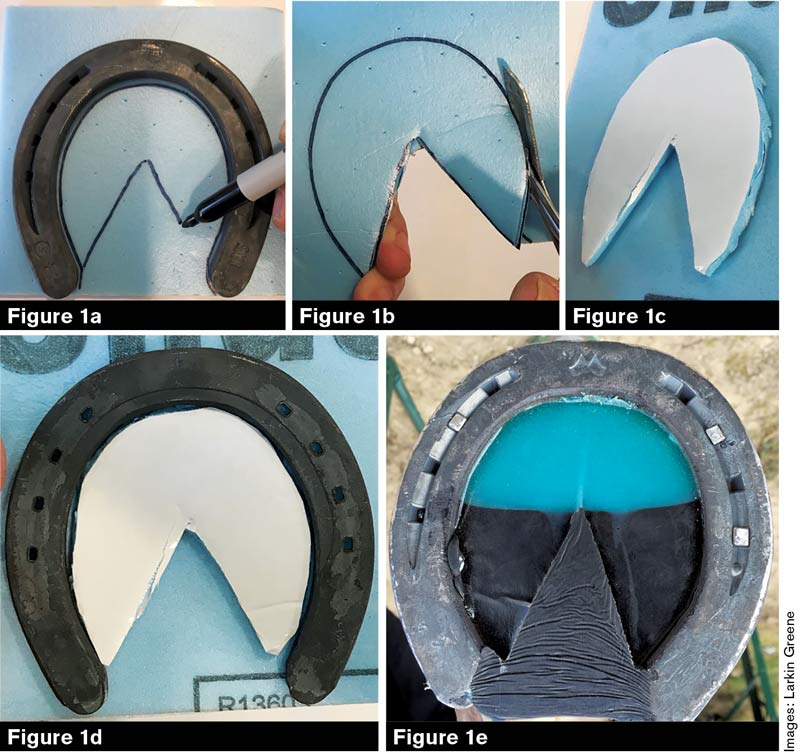 You’re shoeing a horse that’s in need of frog support, but you don’t have heart-bar shoes or a way to weld a frog plate into a shoe. What are some alternatives for creating frog support?

Morgan Hill, Calif., farrier Mike Hayward says an effective option that uses is by creating it from a pour-in pad. After shaping the shoe, trace the inside of the web on the blue foam pad and include where you want the frog to be (Figure 1a). Cut out the area (Figure 1b) and place it onto another foam pad (Figure 1c), which will be placed on the foot surface of the shoe (Figure 1d). After placing the package on the foot, fill the void with the pour-in pad material of your choice and you will get a raised-up frog piece (Figure 1e).

Mike uses this application with Vettec products quite a bit and has found success with it. One of the advantages is the ability to alternate the materials’ level of firmness. He prefers to apply Equi-Pak Soft in the toe and firmer support in the back half of the foot.

The material remains in the foot fairly well. Using mesh during application certainly will help. Applying Equi-Pak CS with horses that are on rough, hard ground such as where Mike shoes in Northern California does not withstand as well as Equi-Pak.

If you have difficulty with the material adhering to the sole, running a butane torch or cigar lighter over the sole and exfoliating it with a wire wheel works well.

How to Achieve the Benefits of a Frog Support Horseshoe

An Easy Way To Keep Your Tool Cart Secure