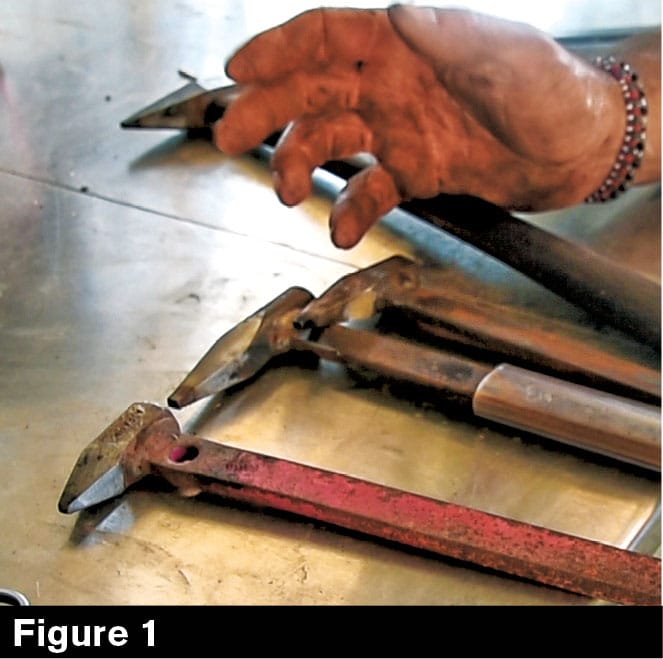 Pictured Above: The punches in the far right and left of the photo are head stamps, while the two in the middle are drifts.

If you are a horseshoer, you may have found that sometimes you wreck your tools. Proper maintenance will enable some tools to last longer and work better. In the case of the punch, the key is to not let it deterioratetoo much before you redress it. Ideally, you won’t let it get to the point where it mushrooms out — although that certainly happens. If and when it does, you’ll find you have to spend a lot more time at the grinder to redress it. Conversely, if you regularly monitor the wear on the punch and dress it when you see early signs of distortion, only a minimal touch up will be needed.

In Figure 1 (top), you’ll see I have a few different punches. One of the punches I used when a shoe was too hot, so it just mushroomed. I have another punch that I know was used at a colder heat, which is my preference for punching, that also needs a little tuning — but it’s not mushrooming; it just has some dull edges on it.

Two of the punches pictured are head stamps, which will basically serve as a shaper for the nail head. The two other punches are mainly for drifts. The basic function of a drift is to get from the top of the section to the bottom with…

Premium content is for our Digital-only and Premium subscribers. A Print-only subscription doesn't qualify. Please purchase/upgrade a subscription with the Digital product to get access to all American Farriers Journal content and archives online.
KEYWORDS Adam Fahr AFT American Farriers Team Tool tips tuning a punch [Video] Tool Tips: Tuning Your Pritchel to a Punch

Tuning a Pritchel is an Exercise in Precision

Punches and Fullers and Shoes That Stay On