We all know the term “hot nail.” The translation is lame horse. Driving nails into “the quick” means the nail is inside the perimeter of the white line and into sensitive tissue. I am not sure how we came to call this “the quick” because I can assure you that the horses never are such. The term “hot nail” better describes the hoof in this situation. The hoof will carry excessive heat and a throbbing digital pulse. Hot throbbing hoof, “hot nail,” that is easily understood. 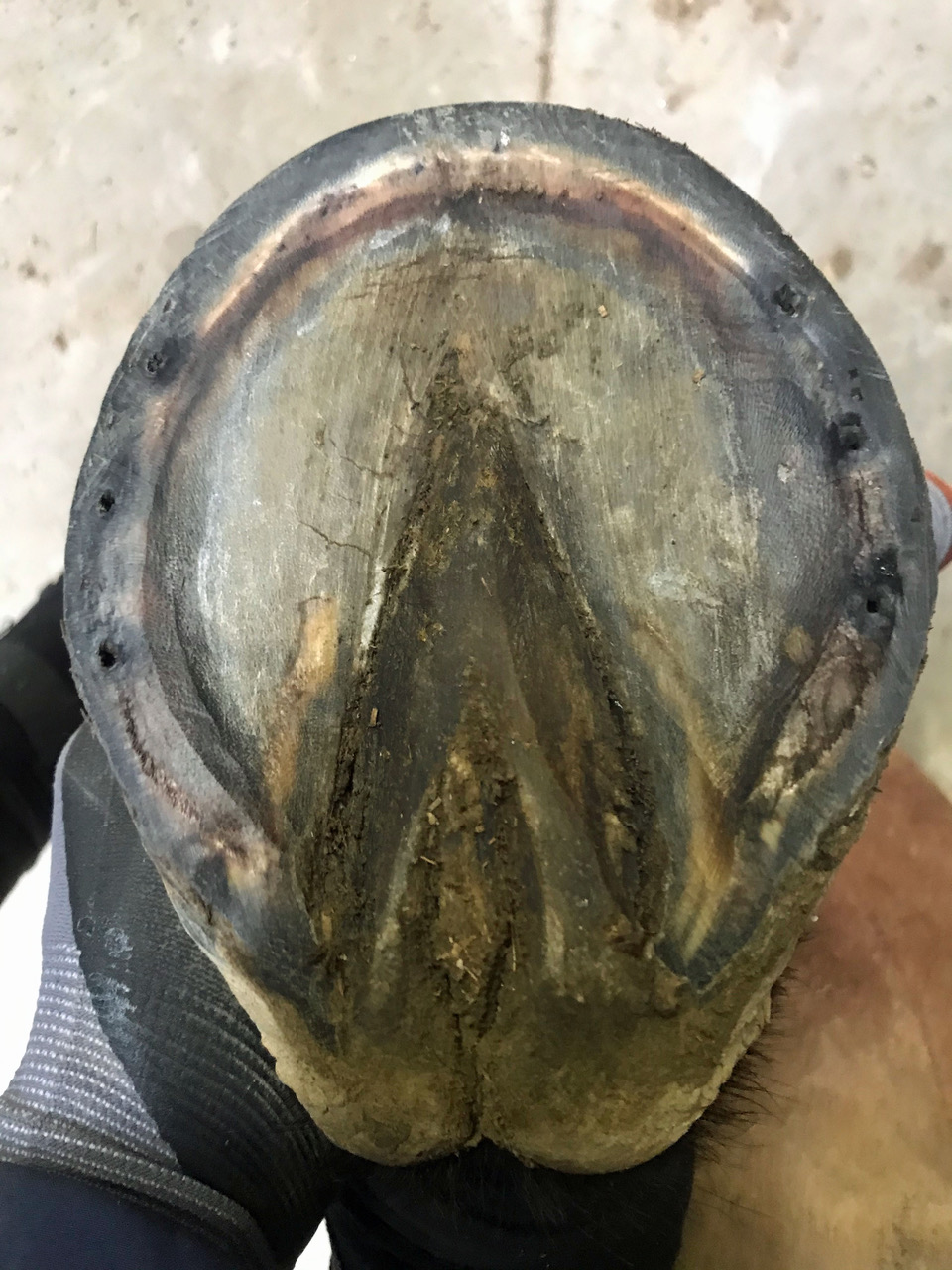 Figure 1 shows a nail pattern that is a little close. Both toe nails are outside the white line and completely safe. Middle nails are on the border, and the heel nails are inside the border of the white line, especially the heel nail on the right side of this hoof (medial heel). This horse seemed to be sound even though the hoof is showing trauma from those heel nails. Often when the horse doesn’t show signs of lameness the assumption is that all is well, and it often is.  Every farrier, particularly the paddock blacksmith, has been in a spot where they had to say a little prayer while driving a horseshoe nail. However, when nail placement is optional, it is best to make use of the proper areas of hoof wall. Ideally, nails should be placed more towards the toe than the heel. The visual indicator I like to use is the widest part of the hoof. Nails kept forward of that part of the hoof wall are far less likely to develop a problem.

The caudal part of a hoof (heel area) expands and contracts with each stride as a horse bears weight upon it. The widest part of a hoof is normally defined, from within, by the wings of the coffin bone. A laminar attachment between the hoof wall and coffin bone prevents much movement in that area so most of the expansion/contraction happens caudally from the widest part back to the heel itself. Therefore, farriers consider optimal nail placement to be forward from the widest part. Nails placed deep into the caudal region of the hoof wall are subjected to more movement than those in the toe area. This explains why heel nails are normally the first to break. These are the ones remaining in the hoof wall after the shoes are pulled. The forces of expansion/contraction have finally sheered that nail off. So, if a nail has been placed close to “the quick” and in the dynamic caudal region of hoof wall there is far more chance of problems occurring than the same nail placed more into the toe area. The heel nail holes in picture one shows some trauma indications from this type of nail placement. Figure 2 illustrates these same placements with a shoe still on. The heel nails are clearly in the caudal area which is becoming narrower and as such into that dynamic portion of hoof which is behind the widest part. Technically these nails were not “hot” but looking at the hoof after the fact reveals that something is going on. Maybe we can call these nails “warm”.  When a hoof wall is fully intact a well fit shoe should yield a nail pattern like Figure 3 where all nails are kept forward of that widest point (same hoof). 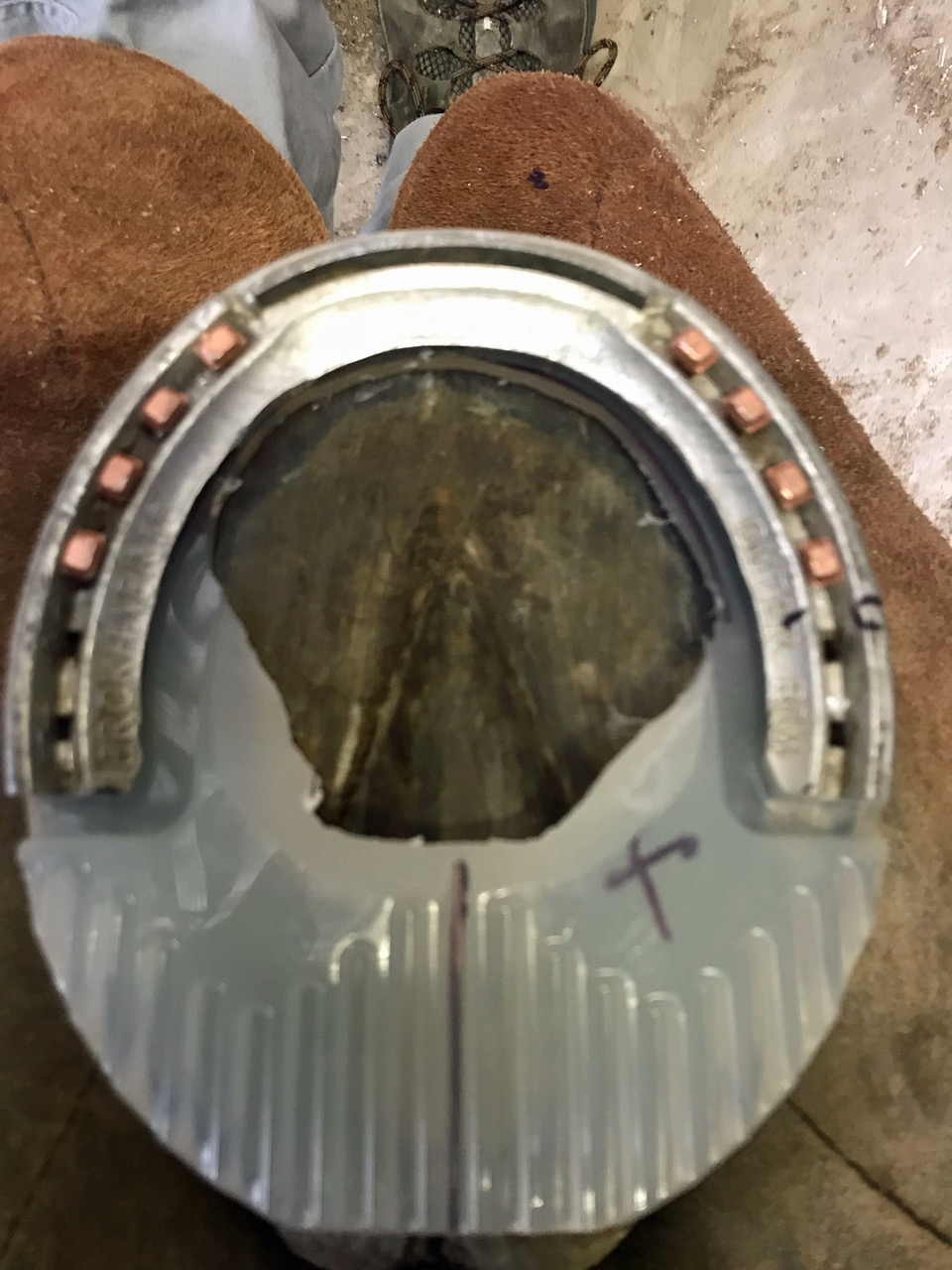 People have been nailing shoes on horses for hundreds of years. Nobody ever wanted one to come off before it was time. If a horse throws a shoe it is normally because a hind hoof clipped the shoe of a front hoof. This ordinarily happens where the heel of the shoe meets the heel of the hoof wall on that front foot. Nails closer to that heel strike do offer a mechanical advantage against pulling that shoe. Realistically, when a hind hoof and shoe strike the front, a horseshoe will be pulled or distorted no matter where we put the nails, making the risk/reward value of a deep heel nail very low when there are other options for nailing.

I believe the standards of proper nail placement to be a very sound theory. But an idea which, with any luck, the horse will never warm up to.

p>Steve Stanley is a second generation farrier who started shoeing in 1973. He is based in Versailles, Ky.