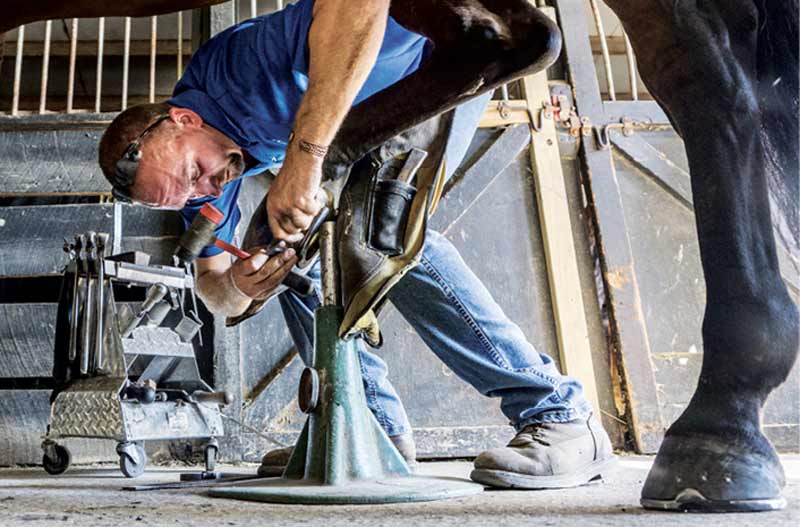 Practice is the Key to Forging Proficiency

Pictured Above: As a competitor or a certification candidate, the farrier’s job is to replicate the specimen shoe, says David Hallock, a Michigan farrier.

How do you get to Carnegie Hall? Practice, man, practice.

Although it’s an old joke, there’s plenty of wisdom that can be applied to any situation — including farriery. Participating in certifications, credentialing and forging competitions are great ways of improving your skills, but to do well, you still have to practice. Without practice, an aspiring farrier won’t get very far. And how one practices might just determine how successful one might be.

When practicing for certification or a contest, it might seem logical to grab a piece of bar stock and forge shoe after shoe. Instead, simplify your practice.

“I think one of the big mistakes that farriers make is that they practice the whole shoe instead of elements of the shoes,” says David Hallock, a Dansville, Mich., farrier and an American Farrier’s Association certification tester…

Premium content is for our Digital-only and Premium subscribers. A Print-only subscription doesn't qualify. Please purchase/upgrade a subscription with the Digital product to get access to all American Farriers Journal content and archives online.
KEYWORDS Cody Gregory critiquing your forging David Hallock practicing forging proficiency preparing for farrier certifications preparing for forging competitions

Simplify Practice by Forging Elements of the Horseshoe

The Key to Soundness is in the Heels

Delivering The Ingredients, Not The Recipe, Is Key To Publishing Success