Copper peptides have been in cosmetic and medical products for years, but now they are also being put to use to heal hooves.

A new hoof repair product based on human health and skin care chemicals is being offered to the hoof-care industry. Now available in an easy to apply gel formula as well as in the original spray formula. 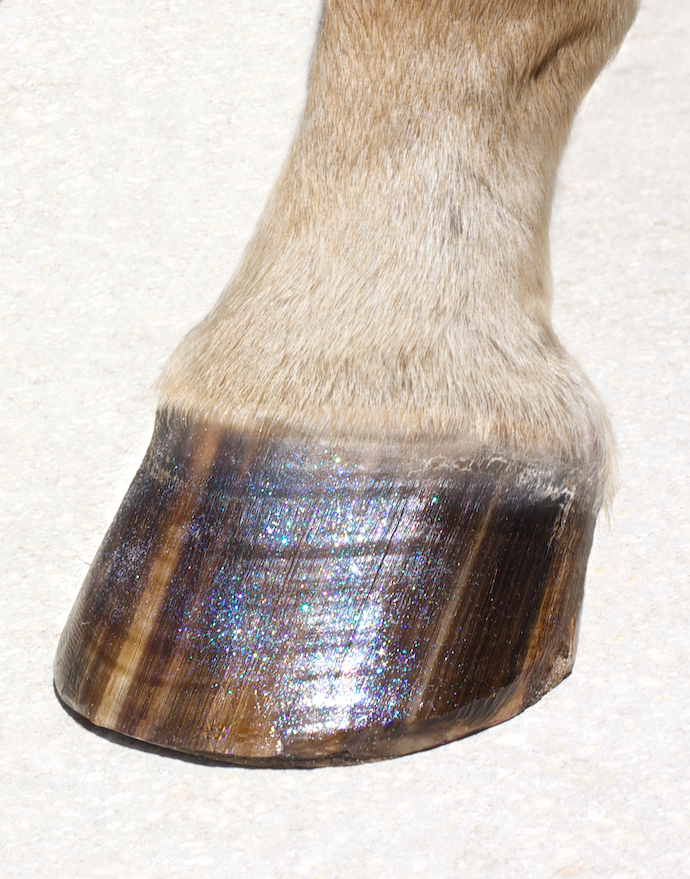 Richard Shakalis, an SBS co-founder and researcher, notes that proteins are the essential building blocks for human and animal tissue, including muscle, bone, hair, ligaments, tendons and fingernails (or in the case of horses, hooves). He says peptides are identical to proteins in that they are composed of amino acids.

“Peptides are usually found inside cells in many forms and act as antibodies, hormones or cell function facilitators. Copper peptides are a specific type of peptide that has a copper ion attached to it and is found naturally in cells. In this form, copper peptides act as messengers at the cellular level signals to ‘switch on’ cells several significant ways. Copper peptides are effective on horse’s hooves because they stimulate the coronary band to produce a stronger, healthier hoof in the same way copper peptides activate the production of new human skin and hair,” Dr. Shakalis says.

Today, copper peptides are used ointments for burns, medicaments to help organ and tissue transplants and as salves for post cancer irradiated skin. They also are commonly found in human cosmetic products such as anti-wrinkle creams and hair growth formulas. The U.S. Food and Drug Administration’s Center for Veterinary Medicine does not list copper peptides as a class of regulated drugs, and the FDA does not impose any rules on cosmetic products intended for use on animals.

The MayoClinic.com site says in an October 2004 report: “Copper peptides enhance wound healing. They also stimulate production of collagen and may enhance the action of antioxidants. Shakalis says, “We have seen the use of copper peptides go full circle. They were first used on horses only on an experimental basis with production of human treatments as the final result. Copper peptides were found to be very effective and beneficial for these horses, but no equine products were ever produced.”

Now such equine products are available, he says, adding, “We look to copper peptides, in conjunction with good nutrition, to help solve many chronic structural hoof problems. The copper peptides will wake up and switch on the cells of the coronary band to grow strong, healthy hoof as long it has the proper building blocks of nutrition to refuel these critical cells.”

Copper Peptides, combined with good nutrition can go a long way toward restoring damaged hooves, according to researchers with SBS Equine.  They "switch on" the cells at the coronary band to draw the nutrition they need to refuel from the blood supply for faster healing and growth. Copper peptides can be applied to the coronary band generously once a day, and on to damaged areas of the hoof, hair, and skin to promote faster healing and growth. For more information visit SBS Equine.