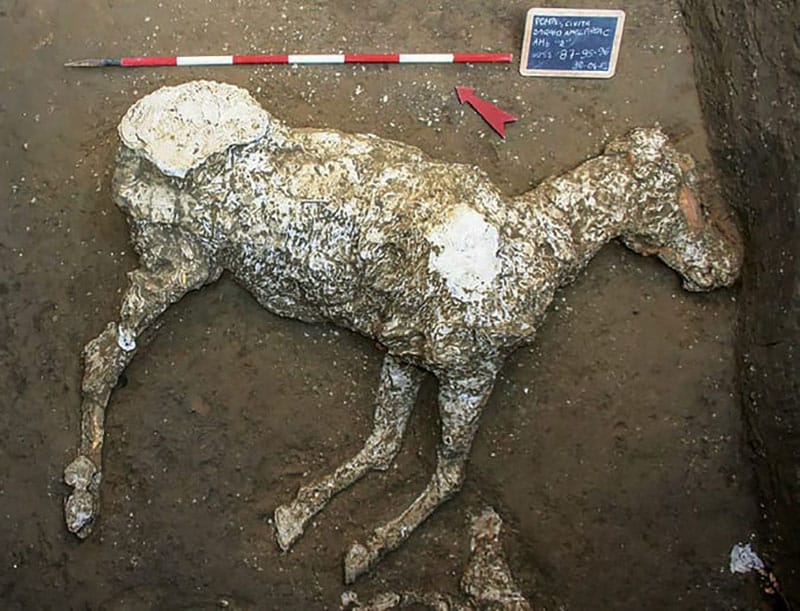 Archaeologists with the Archaeological Park of Pompeii unearthed a full cast of a horse that was buried in the ash of Mount Vesuvius, which erupted and decimated Pompeii in 79 A.D. The cast is the first of its kind, revealing the horse’s entire body. Bridle bits and remains of two other horses were also uncovered in the dig site. The find was made due to an ongoing criminal investigation called Operazione Artemide, which began in 2014.

The discovery was made in the stables of an ancient villa, located in the Civita Giuliana area outside Pompeii’s walls. The archaeologists uncovered the site, which was partially excavated in the 1950s, after being alerted to activity from tombaroli, or tomb robbers, in the area.

Two of the horses found were bridled, implying that they might have been intended as a means of escape from the eruption, Massimo Osanna, director general of the Archaeological Park of Pompeii, told National Geographic. However, it appears that the horses succumbed to the noxious gas fumes and smothering ash. The full-body cast of one of the horses shows it died lying on its left side.

Archaeologists say they are certain the cast of a horse and not a mule or donkey due to an imprint left in the ground by its left ear. The horse was measured to be 4.9 feet in height at its shoulders, small by today’s standards but very large for a horse of that time. The horse’s height leads archaeologists to…