Are You Using the Horn Correctly?

A farrier has a responsibility to the horse and the trade, and a good place to start is the basics of forging, says legendary farrier Bob Marshall.

A common mistake is the incorrect use of the horn.

“There are three lines you want to imagine,” says the International Horseshoeing Hall Of Fame member. “One is on the top of the horn (Figure 1), one on the top right side and another on the top left side of the horn.”

These lines will guide your use of the horn.

“This is where a lot of people go wrong and they get a little bit misunderstood,” he says, placing a flexible metal ruler that represents bar stock on top of the horn. “When you hit the shoe on the right side of the horn, watch the ruler on the other side because that’s where it bends (Figure 2a). It bends in areas that you don’t think it would. If you bring it toward the back of the horn (Figure 2b), it will still bend but not quite as much. Therefore, you get a better flow with your shoe rather than it bending from the far left side of the ruler to the top of the horn now.”

Many older anvils in England have a groove on the left side of the anvil’s table where farriers would slide the bar stock to their lines.

“If you want a tighter bend, you’d turn it closer to the table,” Marshall explains. “A longer bend would require turning it away from the table. A smaller shoe — just move it to where it’s appropriate.”

The area immediately after the radius on the right side of the horn is for bending the shoe.

“If I lower my tong hand, that would bend the shoe,” he says. “You don’t bend it with the hammer. The hammer blocks it as you push your left hand down. Roll it and block it, don’t hold it and knock it. To straighten it, you just lift it and strike the stock on the imaginary line on the immediate near side of the horn. Bend it on the far side, straighten it on the near side.”

Hitting it directly on top of the horn will “squish the heck out of it,” Marshall says.

“Sometimes we do that, right?” he says. “When we’re fullering or you want to draw out a piece of steel, you’ll do it. It’s almost like your hammer is coming down and you’re pulling it through a roller. That will stretch steel like you would not imagine.” 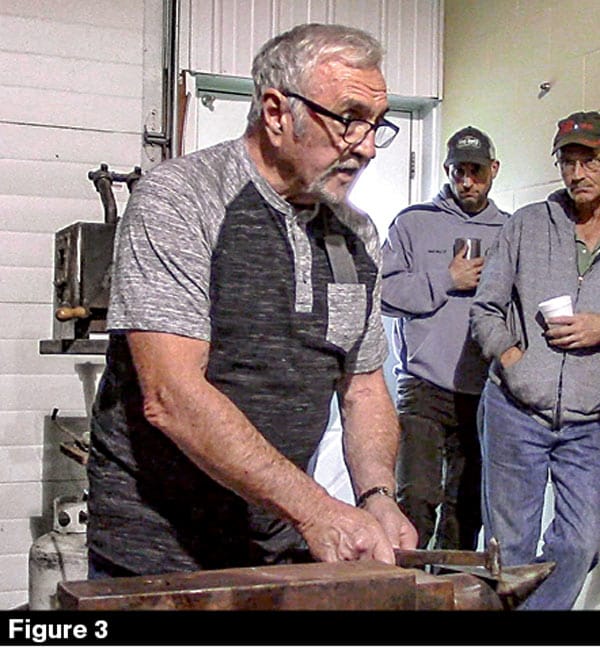 A pet peeve for Marshall is watching someone bend stock with the hammer striking on the far side of the horn.

“It irritates me because it’s just as round on the top as it is there,” he says. “So why go somewhere you can’t see? If I really want to hit it, come to the imaginary line at the top of the far side of the horn like that, bang!” (Figure 3)

Are You Using The Correct Heat While Hot Shoeing?

Are You Sighting Front Feet Correctly?