Archaeologists with the Archaeological Park of Pompeii announced that they have unearthed a full cast of a horse that was buried in the ash of Mount Vesuvius, which erupted and decimated Pompeii in 79 A.D. The cast is the first of its kind, revealing the horse’s entire body. Bridle bits and remains of two other horses were also uncovered in the dig site. The find was made due to an ongoing criminal investigation called Operazione Artemide, which began in 2014.

The discovery was made in the stables of an ancient villa, located in the Civita Giuliana area outside Pompeii’s walls. The archaeologists uncovered the site, which was partially excavated in the 1950s, after being alerted to activity from tombaroli, or tomb robbers, in the area.

Two of the horses found were bridled, implying that they might have been intended as a means of escape from the eruption, Massimo Osanna, director general of the Archaeological Park of Pompeii, told National Geographic. However, it appears that the horses succumbed to the noxious gas fumes and smothering ash. The full-body cast of one of the horses shows it died lying on its left side. 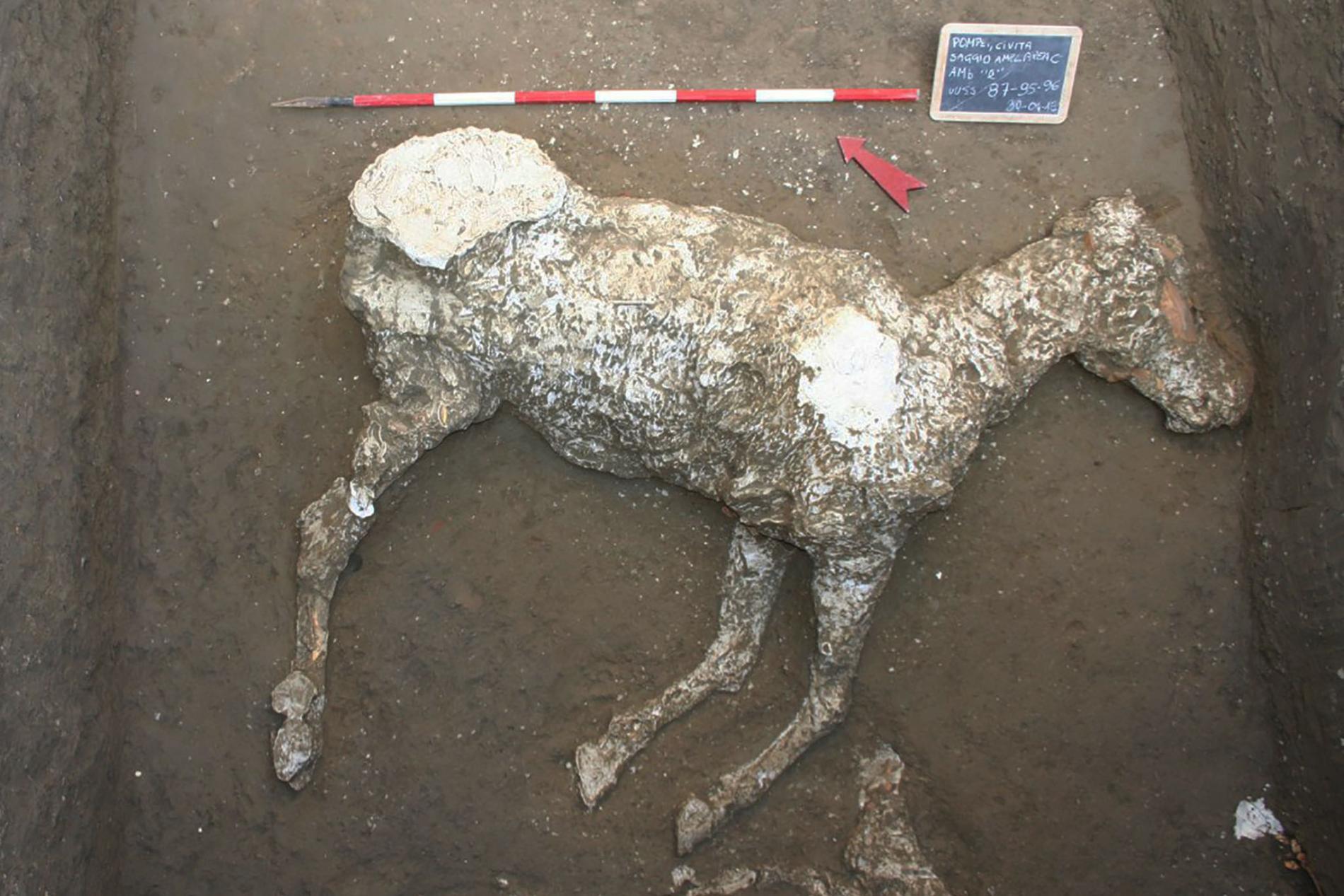 Archaeologists say they are certain the cast is of a horse and not a mule or donkey due to an imprint left in the ground by its left ear, according to The Local. The horse was measured to be 4.9 feet in height at its shoulders, small by today’s standards but very large for a horse of that time, Live Science reports. The horse’s height leads archaeologists to believe that this horse might have been specially bred and performed a specific job.

Unfortunately, the skeletal remains of another horse that were uncovered along with the plaster cast were severely damaged by the tombaroli. The archaeology team also discovered that part of a void left in the ash by another horse had been destroyed after casting only two of its legs.

In addition to the uncovered cast, pieces of harnesses and a saddle were also discovered in the unearthed stable, as well as the cast of a trough, all evidence that the horses in these stables were an established fixture in the lives of the people who lived at the villa.

This archaeological find, although unique to Pompeii, is not the first significant ancient equine discovery made in 2018. Earlier in the year, scientists also recovered the body of an ancient Siberian foal that had been mummified, as well as a full set of hipposandals and ancient horseshoes.

How Can Dietary Changes Minimize Skeletal Disease In Young Horses

They Shoe Horses, Don't They?

The Horse's of Assateague Island