Update to Article Sept. 7, 2018 — Scientists from Russia and South Korea are taking the recent discovery of the 40,000-year-old Siberian foal a step further by cloning the ancient horse, according to Newsweek. Researcher Woo Suk Hwang is one of the key players in attempting to create this clone, having replicated deceased, frozen pets in the past. The Siberian foal would be cloned in a surrogate mare of similar breeding.

All scientists need is one living cell to create the embryo.

“Fortunately, the animal's muscle tissues were undamaged and well preserved, so we managed to get samples of this unique find for biotechnology research,” Dr. Semyon Grigoriev told  The Siberian Times.

Grigoriev is a leading researcher of the laboratory at Mammoth Museum. With this level of preservation, scientists have high hopes for the project.

Top researcher Miss Hae Hyun Kim from Grigoriev’s team will stay in Yakutsk at the North Eastern Federal University with other scientists, reports The Siberian Times. Kim has successfully extracted a live cell from a frozen dog before. Complications with this process can arise: water can crystalize inside and destroy the cell. Even so, Kim plans to put use her experience to successfully extract a live cell from the preserved foal.

In addition to the plan to clone the foal, more information has been revealed with further analysis. The foal was around 20 days old when it died and had reddish brown fur with a black mane and tail, as well as a black stripe down its back. It is similar to the Yakut horses living in the area.

Update to Article Aug. 27, 2018 — The foal that defied decomposition is believed to have died from natural causes, having no visible wounds at 2 months old, according to Live Science.

Grigory Savvinov, deputy head of the North-Eastern Federal University in Yakutsk, Russia, told The Siberian Times “the foal must have fallen into some kind of natural trap.” Other experts concluded that the foal could’ve drowned after falling victim to the trap.

In the area of Russia where the foal was found, other wild horses roam the hills; however, the type of horse that the foal was does not match those around today. In fact, the foal belonged to an extinct species that lived in the region 30,000 to 40,000 years ago, according to Semyon Grigoryev, director of the Mammoth Museum in Yakutsk, Russia. “This was called the Lenskaya, or Lena Horse (Equus lenensis), genetically different from those living in Yakutia now,” according to The Siberian Times.

In addition to understanding the foal’s species, scientists will be able to determine the foal’s diet and environment through its preserved organs and woolly coat. As scientists run more tests, they hope to learn more about these equine predecessors.

Watch video footage of scientists performing tests on the foal. 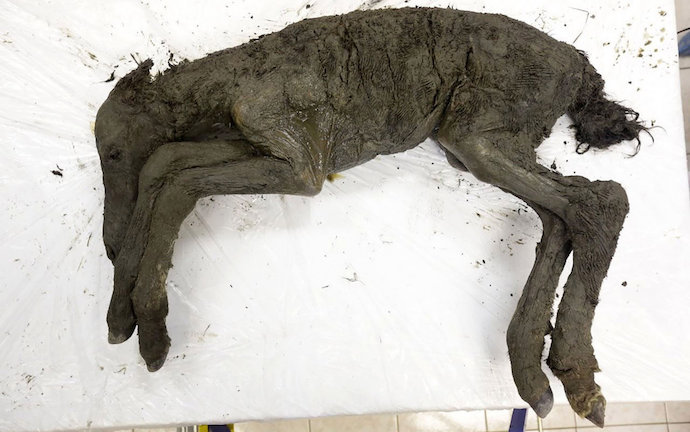 A FOAL THAT IS ESTIMATED TO BE 40,000 YEARS OLD WAS FOUND BY ARCHEOLOGISTS IN SIBERIA.

A preserved foal from the Paleolithic period has been uncovered in Siberia.

Scientists from North-Eastern Federal University in Yakutsk and Kindai University in Japan found the foal at the Batagai depression in the Yakutia region. It was completely preserved in permafrost, with internal organs and hair still intact and no visible wounds.

The foal was about 3 months old when it died and is estimated to be approximately 40,000 years old.

Preserved samples of soil levels were also obtained from the site where the body was found, which  researchers will be able to use to better understand the environment the foal lived in.

“This is the first find in the world of a prehistoric horse of such a young age and with such an amazing level of preservation,” Semyon Grigoryev, head of the Mammoth Museum in Yakutsk, told The Siberian Times.

Life And Lessons In An Ancient Trade

English Students Shape A Future In An Ancient Craft

Ancient Horseshoe Provides Glimpse Into Past