What Made Seabiscuit A Winner?

Seabiscuit, grandson of Man-O-War, may have been one of the biggest underdogs in racing history, making an incredible comeback after losing his first 17 races. His victory in 1938 against Triple Crown Winner War Admiral was unexpected, as most knew Seabiscuit to be lazy, preferring eating and sleeping over racing. His spectacular comeback inspired a nation plagued by the Great Depression, drawing a crowd of 40,000 spectators to Pimlico, Md. President Franklin D. Roosevelt broadcasted the race to 40 million people over the radio, dubbing Seabiscuit a “West Coast Underdog.”

Trainer John E. Fitzsimmons knew 2-year-old Seabiscuit had potential, but the horse’s laziness superseded this. As a result, Fitzsimmons gave Seabiscuit a heavy schedule of smaller races, where he usually finished in the back. After winning two races at Narrangansett Park, people began to pay attention. He’d won five out of 35 races, including three claiming races where he avoided purchase. It wasn’t until trainer Tom Smith took on 4-year-old Seabiscuit that the horse really started to win, finishing first in 11 out of 15 races. In 1937, Seabiscuit was the year’s leading money winner in the U.S.

In order to find out what made Seabiscuit a winner, researchers are digging into Seabiscuit’s past — and future. Jacqueline Cooper, Seabiscuit Heritage Foundation president emeritus, owns Seabiscuit’s descendants, stabled at the historic Ridgewood Ranch in California where Seabiscuit lived out his days and was later buried. After sustaining a serious injury at age 7, Seabiscuit was nursed back to health at Ridgewood Ranch and went on to his legendary win at Santa Anita Park. While at the ranch, he was also a stud and produced many offspring.

Cooper reached out to molecular geneticist Dr. Steven Tammariello, the director of the Institute for Equine Genomics at Binghamton University, who initially did a genetic panel test on a five-time descendant of Seabiscuit named Bronze Sea. The genetic panel could be used to predict a horse’s racing potential. If researchers can look at Seabiscuit’s offspring and their racing potential and then compare that with Seabiscuit’s, there could be potential for discovering what made Seabiscuit such an unlikely winner. There was only one problem. In order to compare the results between Seabiscuit and his progeny, researchers needed DNA from Seabiscuit, who died in 1947. 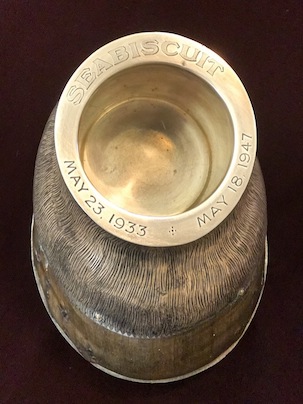 Tammariello and PhD student Kate DeRosa collaborated with Dr. Andy Merriwether in isolating DNA from the coffin bone inside of two of the hoof capsules. Due to the age of the hooves or the harsh chemical treatment of silvering the hooves, the DNA was slightly degraded. However, since the mitochondrial DNA was still intact, that was used to confirm these hooves were indeed from the maternal family line 5-j. Researchers were able to confirm the authenticity of the hooves based on the DNA study, as well as Howard’s historical connection.

Upon further analysis, the hooves led Tammariello and DeRosa to the discovery of a rare genetic combination, mixing the gene variants often found in horses that have strong route-running ability, as well as minor variants found in sprinters. The combination of stamina and speed is reflected in Seabiscuit’s race record, as he won races from five furlongs to 1¼ miles. In addition, horses with this genotype tend to be late bloomers, winning races later than horses without this rare grouping. This could explain why he failed to finish first in his first 17 races. 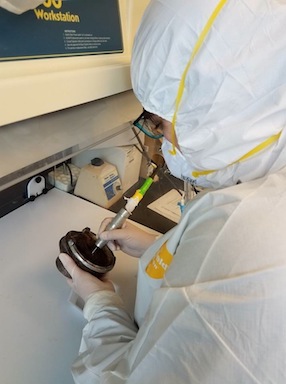 Photo: Jacqueline Cooper. Scientists were able to pull DNA samples from the hooves to match the DNA of Seabiscuit's offspring.

Speed and stamina aren’t the only thing researchers can discover from the DNA sample. Tammariello and DeRosa will continue to examine Seabiscuit’s genome, analyzing other genes linked to physical attributes since he wasn’t described as an impressive looking horse. Also, the researchers plan to focus on genes that encode neurotransmitter receptors, which control behavior like aggression, curiosity and trainability. As more information becomes available, comparisons can be made between this old-time winner and thoroughbreds of today.

Unfortunately, due to the degraded quality of the DNA and insufficient quantity, it is impossible to clone Seabiscuit at this time.

Everyone's A Winner In the Calgary Mail-In Exercise

What is a Half Heart-Bar Shoe and What is it for?