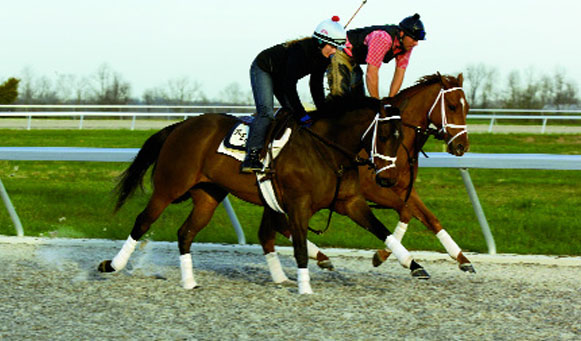 Fewer Overall Injuries, But Other Racing Concerns Are Surfacing With Synthetic Tracks

Synthetic surfaces do seem to offer many advantages for the racing industry, but it has become apparent that they also present new challenges for farriers, trainers and owners.

While the jury is still out on how well synthetic surfaces are really working, most everyone in the racing world seems to recognize that they’ll play an even more critical role in future horse racing.

Already, the Thoroughbred Owners of California organization has documented that gambling dollars, purse revenue and the average number of horses running in each race has increased during every meet in the state since synthetic surfaces were installed due apparently to more gambling interest. And since the number of dollars involved in both purses and gambling is what the industry is all about, synthetic track surfaces are apparently here to stay.

Yet there have been many synthetic track problems over the past several years ranging from new types of injuries, concussion concerns, maintenance worries and even lost racing dates.

While some synthetic tracks have produced faster race times, others have seen slower times when compared to dirt surfaces. Several tracks also tend to perform differently during morning training sessions compared with afternoon racing. And nearly every track has seen maintenance issues, including the need to re-apply the synthetic materials as degrading takes place.

Chuck Gonzales believes the racing industry is at a critical crossroads with the synthetic surfaces. “As an engineer, race shoe manufacturer and race horse owner, I’m appalled and very concerned that there appears to be…

What Causes the Most Serious Racing Injuries?