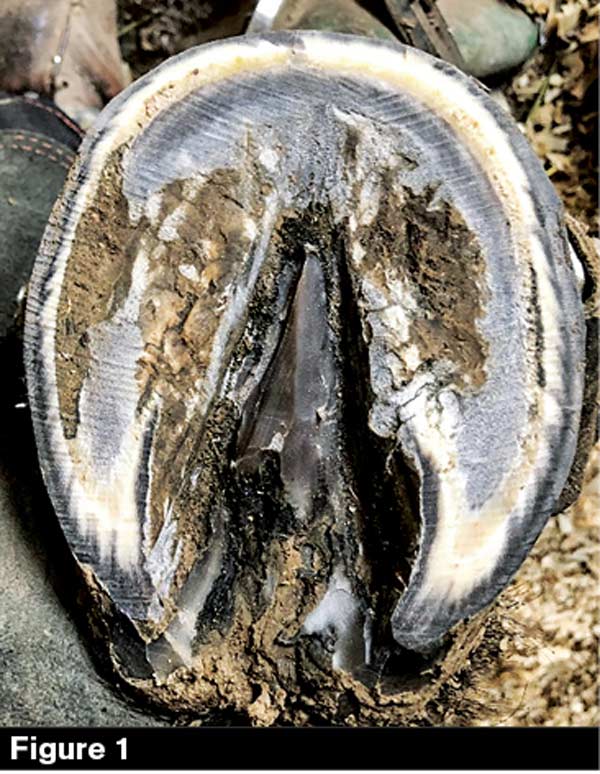 An Overview Of Equine Canker

By Stephen O’Grady posted on May 12, 2018 | Posted in Diseases, Therapeutic Shoeing

Pictured Above: A foot with chronic thrush. Note the unhealthy nature of the frog and the loss of structural mass.

Equine canker is a disease in search of a definition since the cause has not been determined. It could be described as a pathological response to an insult to the foot’s horn-producing tissues. Equine canker has been defined as an infectious process that results in the development of a chronic, hypertrophic, moist pododermatitis of the horn-producing tissues, generally in the palmar / plantar sections of the foot. Usually originating in the frog, canker may remain focal or invade the adjacent sole, bars and hoof wall. Canker is generally confined to and proliferates from the epidermal tissue and rarely invades the underlying dermal tissue. Although the etiology of canker remains elusive, it can consistently and effectively be treated and resolved.1,2,3,4

The etiology of canker remains evasive, but generally is seen in a frog that is unhealthy and enters through a break in the horn tissue. There is another disease entity termed “coronary band dystrophy,” which appears to have an immune-mediated component that is associated with or can lead to canker (O’Grady SE. “Coronary Band Dystrophy,” 2017, in review). Wet environmental factors may play a role as there is a seasonal incidence of canker during the rainy season in Florida from July until December.1

Previously, it was felt that unhygienic conditions were causative, but canker is seen in horses that are well cared for and receive regular…