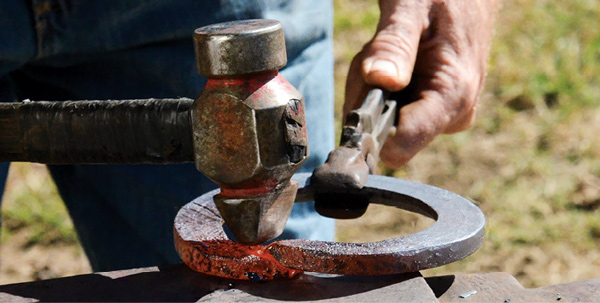 April 7, 2018 | Posted in Business Practices, Clients, Education, Equipment, Diseases, Lamenesses, Therapeutic Shoeing
Pictured Above: In the weeks after announcing a 30% tariff on imported steel and 10% duty on imported aluminum, vendors were notifying manufacturers that prices were increasing.

President Donald Trump followed through with a campaign promise to impose stiff tariffs on imported steel and aluminum from all countries except Canada and Mexico.

The 25% tariff on imported steel and 10% duty on imported aluminum took effect in late March. Although the tariffs affect raw materials, consumers can expect higher costs for products made with imported steel or aluminum, according to the Acton Institute. Farrier industry manufacturers and retailers expect minimal price increases.

“I don’t think it will be as big of an impact,” John Harshbarger of Amarillo, Texas-based Well-Shod told American Farriers Journal. “Most farrier products are already manufactured. You’ll probably see a small price increase in products, but you’ll see that in most anything that contains steel or aluminum.”

Farrier tool manufacturers that use American-made steel, such as Drummond, Wis.-based Bloom Forge don’t expect to see any ripple effects.

“We’re dealing with tool steel — S7 and H13 — not structural steel,” explains Roy Bloom, a member of the International Horseshoeing Hall Of Fame. “I’m pretty certain that most of those are not made anywhere but here.”

In the weeks leading up to the tariffs taking effect, some suppliers notified manufacturers of expected price increases for raw materials. Milwaukee, Wis.-based Ryerson told Stonewell Bodies in mid-March that the price of common grade…