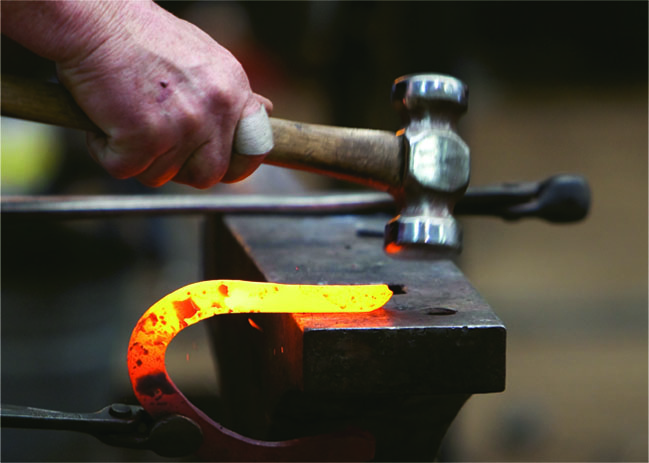 Making The Case For Building Your Forging Skills

By Toby Raymond posted on September 1, 2009 | Posted in Forging

The village smithy is a thing of the past. Today, the sound of steel against steel is more typically heard from an anvil hauled from the back of a farrier rig, more often from modifying a keg shoe than building a shoe from hot steel.

However, despite today’s technologies and conveniences, the forge remains the glowing heart of hoof care.

To Westminster, Mass., resident, John Blombach, an AFA certified journeyman farrier with 45 years of shoeing and competing to his credit, there’s no doubt of it. “Forging is essential to my practice; without it, I wouldn’t be able to get a precise fit,” he says, adding that it’s just as true when using keg shoes, “it’s the fine tuning that makes the difference.”

As an example, Blombach mentions an equitation show horse that came in from the paddock this past spring with a left rear quarter crack bleeding from the coronary band.

His prescription was to use stout aluminum shoes with an extra clip drawn at the crack behind the cleft of the hoof with a diagonal clip to stabilize the foot.

“The trauma was stopped immediately, the foot grew 3/8 inch by the next shoeing and the horse stayed sound, all because I was able to use the forge to make that modification,” he says.

Finding the Right Fit for Titanium

Sorting Out Your Welding Choices