What’s Wrong With This Picture?

By Christy West posted on December 1, 2000 | Posted in Anatomy

When a foal arrives, it’s usually in the middle of the night when owners and trainers are least ready to deal with surprises. This Quarter Horse’s birth gave owners Rick and Joyce Osborne of Cambridge, Minn., a surprise very few people in the world have ever seen.

At 1:30 a.m. on May 28, while they were looking over their new arrival, Joyce blinked and rubbed her sleepy eyes as she looked at their new colt, Spendy. “I wanted to make sure I was seeing straight so early in the morning,” she says. “But I still saw an extra foot on his left foreleg.”

Except for his extra hoof, Spendy seemed healthy and happy, but the Osbornes had a veterinarian come out that Sunday morning anyway. The vet had heard of a five-footed horse before, but had never seen one. Since the colt was otherwise healthy, the vet suggested they bring him to the Anoka Equine Veterinary Services Clinic in Elk River, Minn., for X-rays and further head-scratching. 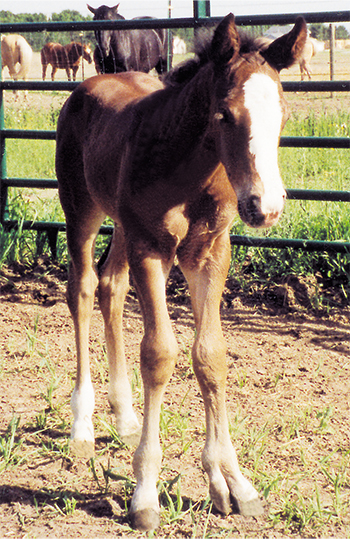 Two days later, the X-rays showed two or possibly three extra knee bones and a duplicate cannon bone, fetlock joint, pastern and hoof. Veterinarians Kevin Voller, J.C. Thieke and Kim Voller decided that surgery should be put off for a month. They wanted to see how the slightly knock-kneed colt’s knee would develop, give the colt time to grow stronger to withstand the extensive surgery and give themselves time to research the problem. Surgery was scheduled for June 27.

What About the Bony Column?