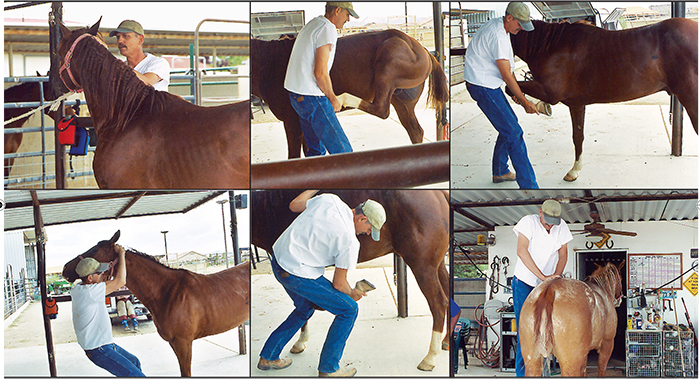 By Toby Raymond posted on November 1, 2009 | Posted in Education

Farrier R.C. “Doc” Price made chiropractic adjustments on a horse during a “Shoeing For A Living” day in Nevada in 2005. While equine chiropractic is becoming more widely used, Veterinary Practice Acts in most states now require a practitioner to have graduated from an accredited program, and many require it to be done by or under the supervision of a veterinarian. The same is true of equine acupuncture.

Once considered outside the realm of commonplace medical procedures, complementary equine therapies, such as acupuncture and animal chiropractic are undergoing a growing acceptance. Both topics were included on the agenda of the American Veterinary Medical Association annual convention held in Seattle, Wash., during July.

Heather Hoyns, a 27-year-veteran veterinarian, uses both regimes for a number of musculoskeletal conditions through Evergreen Equine of Vermont in Brownsville, Vt.

She incorporates elements of both Western and Chinese philosophies, including animal chiropractic, in her practice and maintains that by addressing imbalances of the body, the body will be better able to heal itself.

“The hoof can red flag a condition that may effectively be improved by employing a complementary modality; however, nothing stands alone,” she says. “Without providing proper hoof care and management, the horse’s body won’t be able to hold chiropractic adjustments, or will continue to have problems that acupuncture can address but not fix until the base is stabilized.”

Hoyns earned her DVM degree from the New York State College of Veterinary Medicine, Cornell University in 1981. She became certified in…

Hoof Care and the Coffin Bone

What Were Farriers’ Online Footcare Interests in 2018?