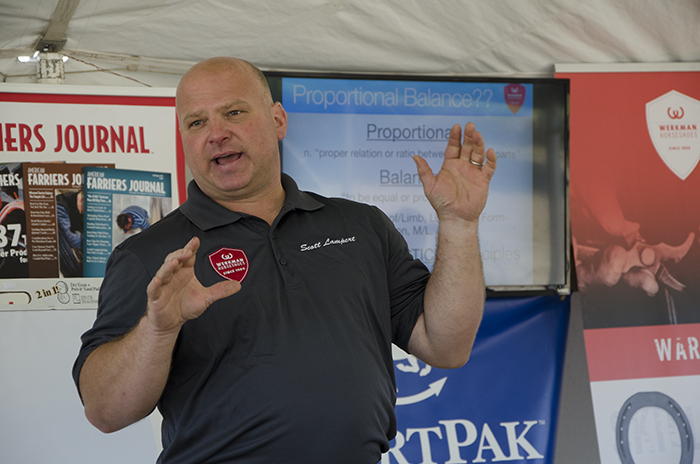 Balancing The Foot With The Golden Ratio

Minnesota farrier develops protocol to aid understanding of the hoof

One day while shoeing a large warmblood, something caught Scott Lampert’s attention.

“There were two fractures in the bars, just little fractures, little lines,” the Lake Elmo, Minn., farrier told attendees at the late July trimming, forging and anatomy clinic hosted by farrier Eddie Strommen in Evanston, Wis. “I thought, ‘Interesting, the horse made those, I didn’t. I wonder if I could use those to balance his foot.’”

Curious, he retrieved a set of dividers and measured the distance from the bar fracture to where the heel exited the hoof in a straight line in general parallel to the bar.

“I thought if I had equal distances on both medial and lateral sides,” Lampert says, “then the back of the foot should be fairly balanced to how he needs it.”

After finishing with the warmblood, he placed the dividers on his box and began working on a pony.

“The pony had similar fractures in the bars as the warmblood did,” he recalls. “I grabbed the dividers and when I put them on the pony, I didn’t have to change the distance. The distance from the bar fracture, in a straight line following the bar, where it exits the foot was the same on the pony as it was on the horse.”

After checking the feet of a Thoroughbred, a draft and a Quarter Horse, the distance remained the same.

“I got really interested in what that distance was, and it measured just a little bit more than 1½ inches,” Lampert…