AFA Convention Much More Than A Social Gathering

By Pat Tearney posted on March 1, 2001 | Posted in Education

Speakers offer a broad range of valuable information for horseshoers

The American Farrier's Association (AFA) annual convention has always offered farriers a chance to meet new friends and renew acquaintances with old ones. But it has also developed into perhaps the most important horseshoeing educational event in the country.

This was clearly demonstrated by the speakers who presented papers at the 2001 annual convention held in Kansas City in early March.

Hoof anatomy, mechanics, legal issues, lameness and shoeing standards were among the topics, offering perhaps the finest quality of vital information of any AFA Convention to date.

Pollitt, a noted Australian researcher from the University of Queensland, offered a comprehensive update on the latest findings regarding the inner hoof wall and also shared detailed illustrations. He also presented findings from his research into the causes of equine laminitis.

Pollitt believes that Streptococcus bovis, a microorganism responsible for rapid fermentation of carbohydrate in the equine hindgut may be what causes laminitis. During grain overload, the population of this organism explodes.

Pollitt is trying to determine if the microorganism crosses over into the horse’s circulatory system, carrying with it a factor that causes an unrestricted release of two metalloproteinase (MMP) enzymes. These enzymes have a role in healthy hoof wall growth when present in controlled quantities, but may prove disastrous in larger amounts, resulting in laminitis. 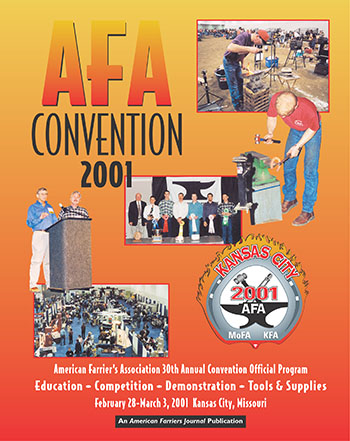 Pollitt notes that this “enzymatic theory” of laminitis differs from…

Competing Does More Than Fill His Trophy Case

AFA Convention-Goers Get The Low-Down on Palmar Foot Pain