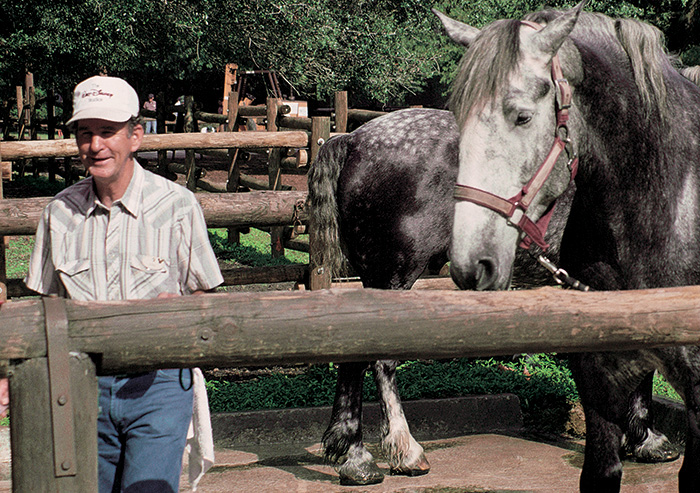 Shoeing On The Disney Stage

DISNEY SHOER. Gary Wade, farrier for Walt Disney World Co., at Disney Worldʼs Tri-Circle-D Ranch in Florida during the 1990s. Wade, who oversees the hoof care of some 70 Disney horses, says public relations are a big part of the job when working with horses that are viewed by millions of people each year.

There’s one big thing about shoeing horses at Disney World, says Gary Wade, the farrier who oversees the hoof care for the world-famed theme parks horses.

“All of our shoeing is on stage, in front of the public,” he says, “whether it’s good or bad.”

Wade shared his experiences as the resident farrier for the Walt Disney World Co. during the March, 2004 Tufts University School of Veterinary Medicine hoof-care seminar on the needs of draft and heavy horses.

Wade does his shoeing in what Wade calls “an old-fashioned shop.” There aren’t any gas forges or power tools. The Percherons that make-up the theme park’s award-winning 8-horse hitch are never shod in stocks and the farriers try to avoid using tranquilizers.

Wade says its important for everyone who works with the Disney horses to realize that they are always in the public eye.

It might surprise many people to find out that Disney doesn’t necessarily seek out employees with a lot of horse experience to work with its horses.