By Jamey Carsel posted on December 1, 2004 | Posted in Shoeing

Here is an excellent keg shoe modification that will be helpful for horses that need a quick traction device added to a shoe. It’s also a possible option for your traction device if you’re putting together your American Farrier’s Association certification shoe board.

Midland, Texas, farrier Jim Poor showed us how to do this version of a braised-on jar calk made from the heels of the shoe at the U.S. Team Championships in Mustang, Okla., where he was the clinician and judge.

Take another heat on the heel and turn the calk outward, as if you were making a trailer (Figures 5 and 6). With a fuller, cut about halfway through the calk at the base from the foot surface, keeping the straight edge of the fuller at the base of the branch and the curved portion toward the calk (Figure 7). The finished cut is shown in Figure 8. 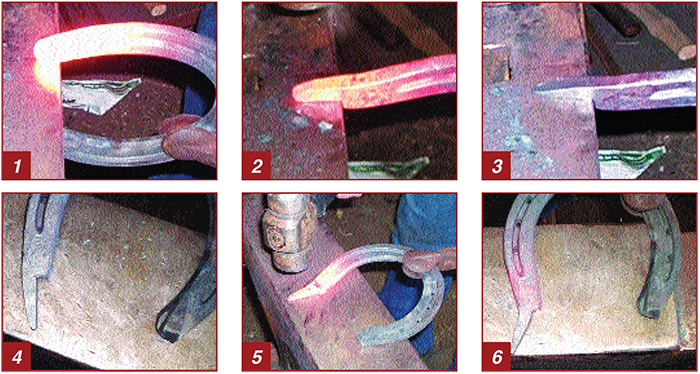 After the cut is made, quench the pointed end of the calk up to 1/8 inch from the cut (Figure 9). This will keep you from destroying the end of the calk in the folding process. Then proceed…

Get a Grip on Traction Devices

Shoeing For Traction With Alan Cooley