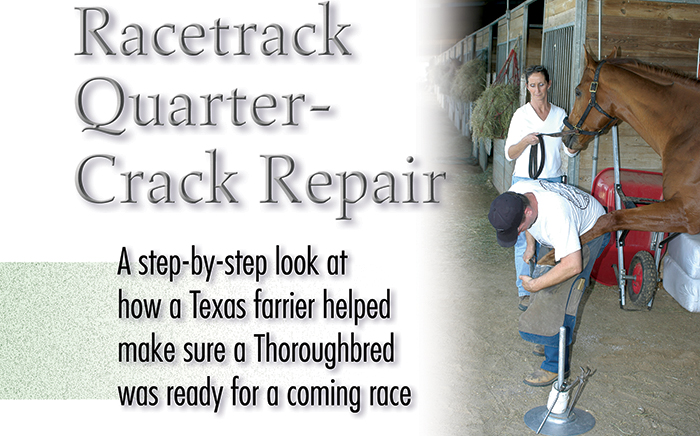 By Pat Tearney posted on May 1, 2006 | Posted in Anatomy, Therapeutic Shoeing

The horseshoeing bug bit Nick Hannan at a young age and the racetrack bug wasn't far behind. The Louisiana native first started pulling shoes for his father, Nick Sr., when he was only 10 years old and was shoeing on his own when he was just 17. He shoes out of Houston,Texas, now and does a variety of horses, but he’s obviously happiest when he’s working on Thoroughbreds at the racetrack.

“There’s just something about being around this type of horse that I love,” says the certified farrier. “I think it’s being part of that atmosphere and the competition. The first time I was at a track and saw those horses coming around the last turn and into the homestretch, I thought, ‘Boy, I want to be a part of this.’ ”

And of course, as a farrier, being “part of this” means Hannan better be ready to deal with quarter cracks.

“You have to be able to get these horses ready to run,” he says. “With the money involved, owners and trainers aren’t happy if a horse has to sit out a race.”

Hannan, who works the Texas Thoroughbred circuit, considers Sam Houston Race Park his home track. He was busy there one recent Wednesday, putting a new patch on a quarter crack for one of his clients.

STRAP PREP. Nick Hannan braces his quarter crack repair with straps trimmed from thin aluminum (shown on the stall jack). He grinds them smooth using a belt sander and drills them…