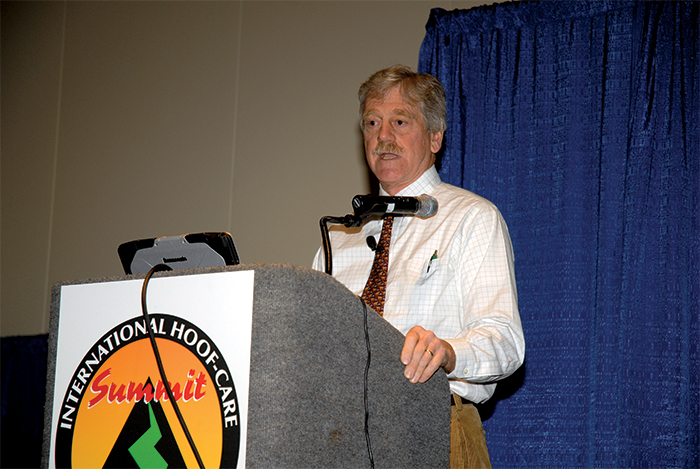 Thorough Lameness Exam Starts Before you Pick up a Hoof

By Pat Tearney posted on March 1, 2010 | Posted in Lamenesses

Harry Werner, an equine veterinarian from North Granby, Mass., and past president of the American Association of Equine Practitioners, believes that a thorough equine foot examination in lameness cases should begin long before you pick up the horse’s foot.

“The foot I’ve been told was affected may be the last thing I pick up,” Werner told attendees at the seventh International Hoof-Care Summit in Cincinnati, Ohio, during February. “I don’t want to go in with a preset notion of what the problem is.”

Werner, who also delivered the Burney Chapman Memorial Lecture sponsored by Life Data Labs, says his system has evolved over 37 years. He credits many other veterinarians and farriers with contributing to its development. He notes that he’s been using the same pair of hoof testers for years and still considers them to be a very valuable asset.

Werner not only starts his exam before he picks up the foot, he’s thinking about it before he even sees the horse.

“When I examine a horse, I want to start with a big view,” he says. “I’m thinking about that horse and focusing on him before I ever arrive at the barn.”

If he’s familiar with the horse, that includes doing a mental review of what kind of work the horse is doing.

Think Before You Patch

Lameness In The Sport Horse