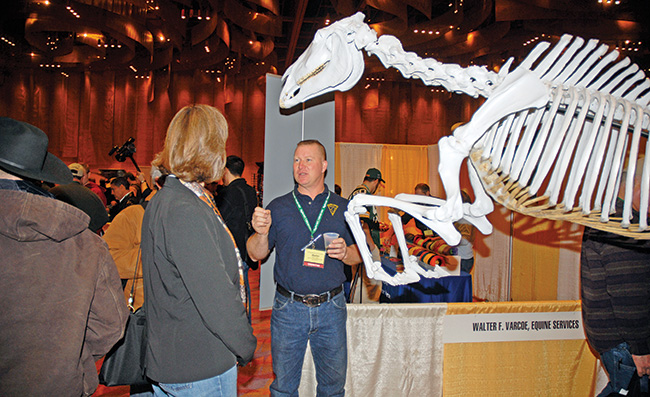 Boning Up on Equine Anatomy

By Chris Gregory posted on November 1, 2011 | Posted in Anatomy

Figure 1. Walter Varcoe’s articulated equine skeletons draw a lot of attention on the trade show floor at the International Hoof-Care Summit. One was even featured on the cover of the January/February 2007 issue of American Farriers Journal.

After several years of going to the International Hoof-Care Summit in Cincinnati and drooling over the articulated skeletons that Walter Varcoe makes, I finally decided to get him to come out to Missouri and do a clinic. These skeletons are quite expensive for a private school, so I thought that I could get a double whammy by not only having Walter show me how to build one, but we could offset the cost with a clinic. It was a great plan.

If you are not familiar with these articulated skeletons, one appeared on the cover of the American Farriers Journal a few years ago, and Varcoe also always has limbs set up on the floor at the Summit trade show (Figure 1). His skill and knowledge when it comes to putting together skeletons has lead to some amazing poses. His work has appeared in numerous vet and farrier venues and at trade shows.

He is currently working on five pieces for the Museum of Natural History in New York City. You can find him on Facebook or www.equine
skeletons.com if you would like to see some really cool bones and skeletons.

Varcoe spent his early career in the Department of Corrections for New York State. The prison where he worked had…