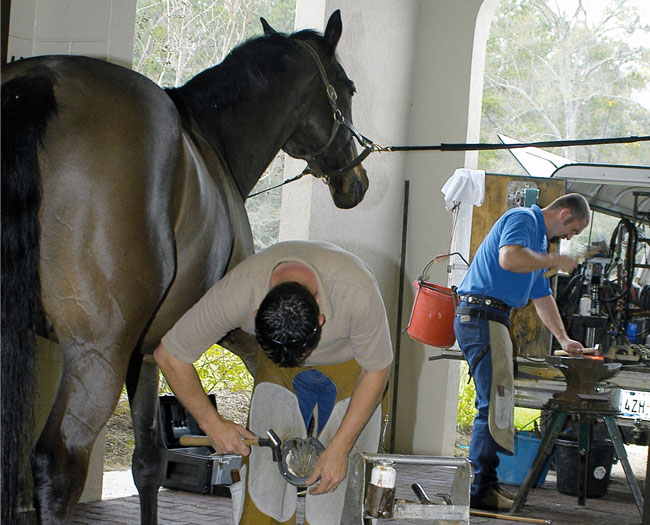 Five Texas farriers demonstrate how teamwork, camaraderie and efficiency pay off in their hoof-care work

TEAMING UP. Bill Poor is silhouetted against the door as Paul Simms works on a horse in the foreground.

The day is already warming up as Bill Poor and Nick Hannan leave a Denny’s restaurant just a few miles from the George H.W. Bush International Airport in Houston, Texas, where they’ve stopped for breakfast and get ready to head out to start their day shoeing horses.

Even though it’s just the first week of March, it’s been t-shirt weather for the farriers for a couple of weeks already.

It’s actually one of the nicest times for the year for shoeing horses in the area, they agree. While the temperature will climb close to 80 by the warmest part of the day, the steamy humidity that the Houston area is known for won’t arrive until later in the year. And it isn’t fly season yet. All in all, it’s a pretty good day to be Shoeing For A Living in East Texas.

Poor and Hannan are both young men, but they have a lot more shoeing experience than you might think. They both grew up in the craft. The Louisiana-born Hannan was just 10-years-old when he started pulling shoes for his father, Nick Sr., and started shoeing on his own when he was just 17. He passed the American Farrier’s Association’s certified farrier test in 1991.

Poor, son of Jim Poor, a member of the International Horseshoeing Hall Of Fame, went to Jim Keith’s horseshoeing school when he was 16 and…

Teaming Up For Better Shoeing