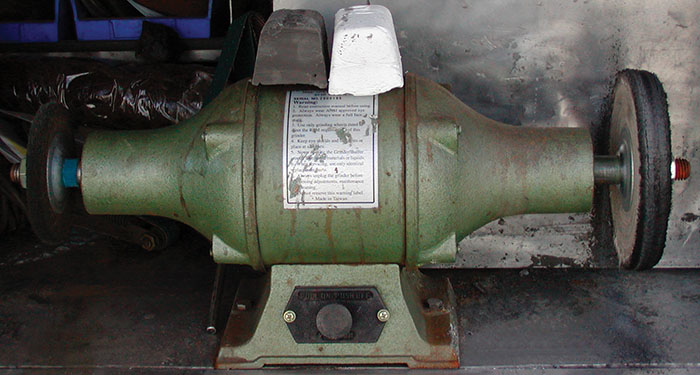 By Jim Halverson posted on April 1, 2003 | Posted in Equipment

Hereʼs how to sharpen a knife in less than 20 seconds, making hoof trimming seem as easy as slicing butter

WHATʼS NEEDED. Use a 1/2 to 3/4 horsepower motor equipped with a Scotch Brite light abrasive wheel and a cloth muslin wheel for a low-cost method of sharpening your hoof knives.

You want to make your knife as sharp as a razor in the shortest amount of time possible? But how is it best done?

The whole sharpening procedure takes a whopping 10 to 20 seconds and your knife is so sharp that it makes hoof trimming seem like cutting through butter.

Get a buffing unit with a 1/2 to 3/4 horsepower motor and a 1/2 to 5/8 shaft that operates on 100 volts. You can build one from a cheap grinder or buy one for under $200. The cost isn’t really that significant because the sharpening unit will last for your entire shoeing career. The compounds and buffing wheels usually last for a year.

Hold the knife cutting edge down with the back of the knife tilted out 15 or 20 degrees. Work the knife edge back and forth from side to side (hook to wood) in two or three passes. Work the knife just below the centerline on both wheels. Be sure to hold on tight to…

Premium content is for our Digital-only and Premium subscribers. A Print-only subscription doesn't qualify. Please purchase/upgrade a subscription with the Digital product to get access to all American Farriers Journal content and archives online.
KEYWORDS buffing wheel knife sharpening techniques sharpening wheels

A Hands-On Approach To Sharpening Your Hoof Knife