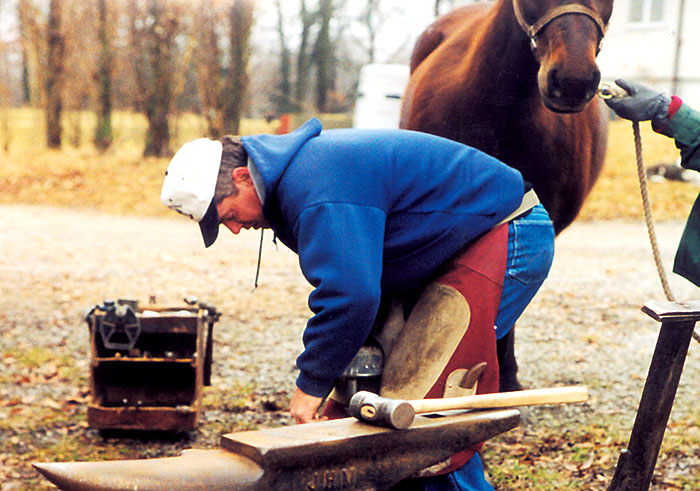 Slowing Down for More Speed

Pictured Above: Neal Poort works on a horse outdoors on a chilly February morning.

Neal Poort is quick to admit he’s not as fast as he used to be. But in the process, he’s sped up.

The 45-year-old Missouri farrier explained that seeming contradiction during a day of shoeing near his Sedalia home in late February.

8:30 a.m. We’re starting a little later than we had originally planned. Poort’s wife, Vicki,  wasn’t feeling well this morning, so he had taken some time to drop their children off at school. There has also been some icy rain early, and it seems like a good idea to let the heavier morning traffic clear out a bit before we take to the road.

When Poort enters the coffee shop where we’d agreed to meet, he’s quickly flagged down by a group at a table near the door. Virtually everyone at the table, it turns out, is a horse owner. Poort spends a few minutes chatting before we head out to his truck and get on the road to meet his first client of the day.

8:50 a.m. It’s a gray day, with a forecast for possibly heavy snow in the afternoon. That’s not good news to Poort, or to others in the Sedalia area. While the snow cover is gone for the most part, Poort says it’s been a tough winter. Like much of the Midwest, this part of Missouri, some 70 miles southeast of Kansas City, was hammered with repeated heavy snows…

Premium content is for our Digital-only and Premium subscribers. A Print-only subscription doesn't qualify. Please purchase/upgrade a subscription with the Digital product to get access to all American Farriers Journal content and archives online.
KEYWORDS Neal Poort Shoeing for a Living Time Management work smart

Shoeing For Traction With Alan Cooley