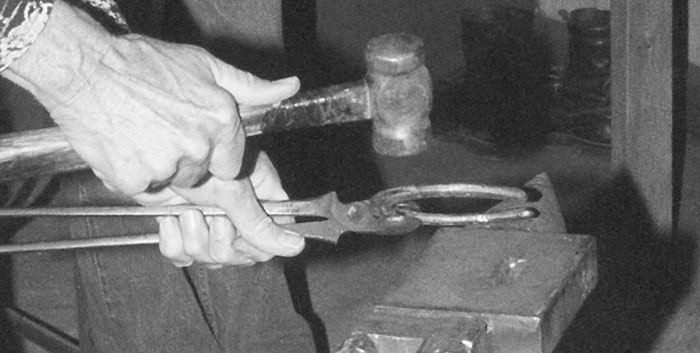 By Pat Tearney posted on September 1, 2001 | Posted in Shoeing

LEVEL CHECK. When hot shoeing, Danny Ward says keg shoes can often be leveled by laying the shoe flat on the anvil and striking one blow on each heel.

When it comes to modifying keg shoes, you can still get quite an argument going concerning the benefits of “hot” vs. “cold” shoeing. But Danny Ward of Martinsville, Va., maintains it’s not an either-or proposition.

“There’s a place for hot shoeing and a place for cold shoeing,” says the American Farrier’s Association (AFA) Certified Journeyman Farrier and member of the International Horseshoeing Hall of Fame. “Try not to get locked into just doing one of them.”

Ward says the big difference between hot shaping and cold shaping shoes — besides always holding the shoe with tongs instead of hands as farriers sometimes will do when cold shoeing — is the force needed for hammer blows.

“Use light blows for hot work,” he says. “You do pretty much the same things as you do with cold shoes, but you hit them more lightly. Just kind of let the hammer drop on the shoe.”

Ward says the even heat distribution available in modern propane forges has made hot shaping shoes easier and says that with a little work, most farriers will be able to shape a keg shoe in one heat. 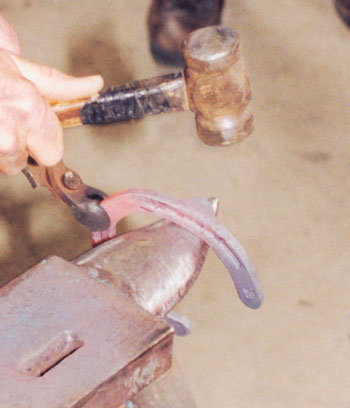 STICK TO THE CENTER. When modifying the curve of a hind keg shoe, Danny Ward restricts his hammer blows to an area from roughly the front of the crease…

A Practical Approach to Hot Fitting