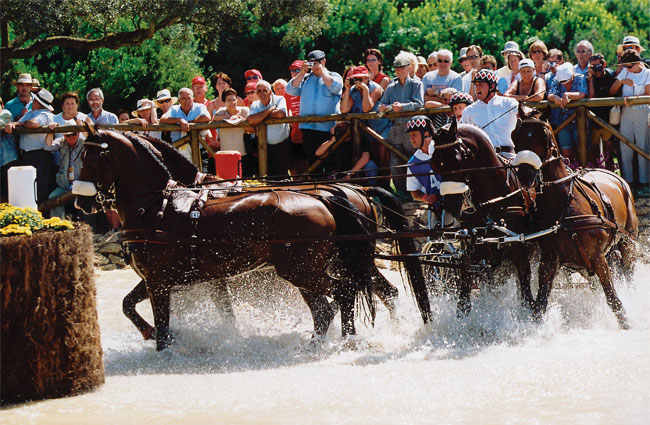 By Summer Best posted on March 1, 2004 | Posted in Shoeing, Trimming

GETTING WET. Chester Weber drives his team through a water hazard during the marathon phase of four-in-hand combined driving competition during the World Equestrian Games in Jerez, Spain.

Thomas Holst is dead honest about how his first few horseshoeing jobs turned out.

“It wasn’t pretty!” he says. “A neighbor friend had some draft horses, and one summer he taught me the basics. I later spent two years in North Dakota just honing my skills.”

Holst tried his talents on all the horses at his family’s farm in Iowa, then progressed on to shoe horses for folks at competitions. His persistence paid off. Today, Holst is the official farrier for advanced combined driving horses belonging to United States Equestrian Team national champions such as Chester Weber of Ocala, Fla. and Tucker Johnson of Hobe Sound, Fla.

“It’s hard to find people in the United States who understand what we need in our competitive environment,” said Weber, who hired Holst to shoe for him in 1997. “We’re shoeing 1,300-pound horses — not light Morgan horses — and their needs are a lot different.”

Those needs, such as careful shoeing for comfort and stability, heavier, wider shoes, more depth of sole, and tiny carbide tips inserted in the heel of each shoe, are working like a dream for Team Weber and his nine driving horses, many of which are Dutch warmbloods.

“A lot of farriers in the United States are familiar with shoeing lighter breeds,” Weber says. “I noticed the farriers…

Shoeing for the Big Show

Tips for Everyday Shoeing from One of the Legends: Bruce Daniels