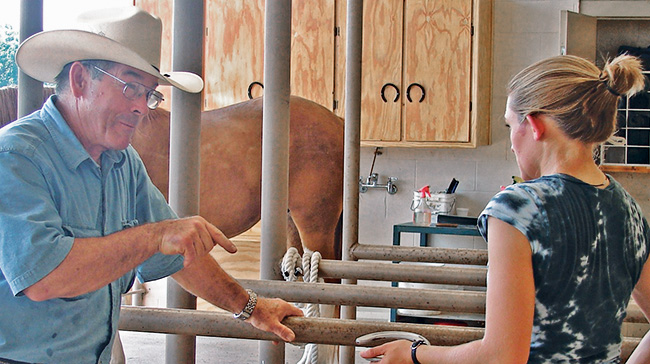 By Joe Odere posted on March 1, 2011 | Posted in Business Practices

The Windridge Therapeutic Equestrian Center of East Texas credits Doug Stanley, left, not only for the hoof care he provides, but also for the education he provides to those who come to the center.

In 2008, American Farriers Journal and the Delta Mustad Hoofcare Center established the Summit Achievement Award to honor equine footcare professionals who have shown dedication to volunteer work, donating their time and talents to the equine community.

This year’s recipient of the award is Doug Stanley of Ore City, Texas. He was presented with the award on Feb 2, 2011, at the International Hoof-Care Summit in Cincinnati, Ohio.

Stanley has volunteered much of his time to the Windridge Therapeutic Equestrian Center of East Texas. Located in Longview, Texas, Windridge is a non-profit organization that provides therapy to children and adults with disabilities through its therapeutic horsemanship programs. Stanley has been working with the Center for more than 20 years. Since then, according to Stanley, he has watched it “develop from a little horse barn to a huge therapeutic center.”

Stanley has provided hoof care for the horses at Windridge He also holds formal and informal education sessions at the center. His passion for farriery has compelled others to pursue studies in equine footcare.

Join Us In Celebrating 35 Great Years Of Footcare Work

Why Giving Back is So Important