How Recession Proof is the Horse Industry?

Whether we might end up sometime in 2008 with an economic slowdown or an actual recession, either would have interesting implications for the horse industry.

While horse owners are already being clearly hit by higher feed and fuel costs, how that will translate into spending on other items is pretty much unknown, says David Anderson, an ag economist at Texas A&M University. Yet he’s convinced that the impact of ethanol, energy prices and drought on feed prices can’t be overlooked.

“High corn, soybean and wheat prices are pulling prices higher for all crops, including alfalfa and hay,” he says. “Alfalfa prices have increased more than 20% nationally over the last year. Drought in some areas of the country over the last couple of years has also contributed to high hay prices.”

How these concerns could translate into spending on other horse-related items will depend largely on how an owner’s job and businesses do during an economic slowdown, says Anderson. While not all areas of the economy are showing signs of trouble, he believes higher costs could have an impact on horse-related activities such as trail rides, cutting-horse events, rodeos and other events. It might also lead to lower horse prices.

“The horse industry, like all others, relies on a growing economy for its well being,” he says. “Some thought and planning will help the industry succeed in this troubling economy.” 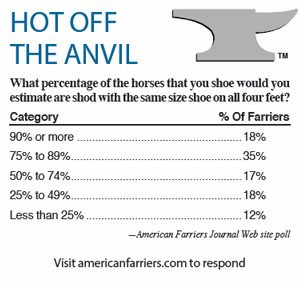